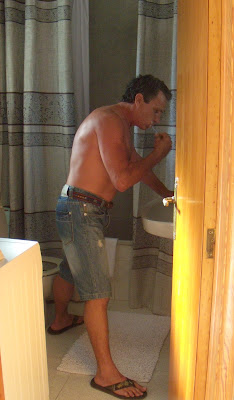 He avoids stepping on the carpet...


He,he! Poor Brito!
For Christmas I have bought some new stuff for the bathroom.
Brito thinks the white carpet on the floor wasn't such a good idea.
He says it will very soon get dirty and yesterday, when I passed the bathroom door,
I saw him standing like this while he was brushing the teeth.

I know he's right, but I have plans to just throw it into the laundry machine, when it gets dirty + out on the line for a while.... and then it will look clean again.
For me it's more important how the bathroom looks.
I thought a white carpet would make it look nicer than a colored one...and
the price was anyhow only 10 Euros.
I will throw it away when it gets too dirty.
But then I probably will buy a bigger one, also white, because
this one is too small in my point of view.
But, there's one question...; -How will he stand if I buy a bigger one?

i just love this picture. Hope you have a brill Christmas. Love to You Susanne& Brito.xxxx