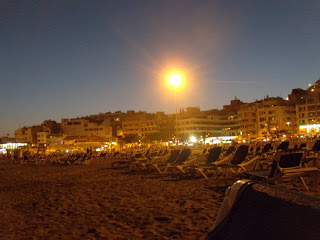 Oh, we had a very different and lovely night but nobody of us did swim in the ocean when it was a little bit chilly and windy, only about +22 degrees..
There is a tradition that you have to have a dip at 12 o'clock in the night and really many did. Even the old ladies from the villages showed up in bikini strolling down to the beach to full fill the tradition.
The beach was crowded with families having meals and many made up small bonfires to stay warm.
The government had made a big bonfire that you can watch in this first video clip.


Later in the night I took a video clip of some youths while they did an other traditional San Juan ritual.
They made a bonfire on the beach and then they took one piece of their clothes and put it into the fire .
Then they started writing their wishes on a piece of paper that they later on throw into the fire and after that they started jumping over it believing their wishes will come thru.

Now we are on the way to the beach again. We'll leave as soon as I've uploaded this video clip, but this time to have a sunbath. The weather is just perfect here on Tenerife; Blue sky and about + 27 degrees.