Last night we made a restaurant/bar stroll.
First we went to restaurant Sunshine Feast in Fañabe.
This restaurant has got real nice food and we had the dinner there. 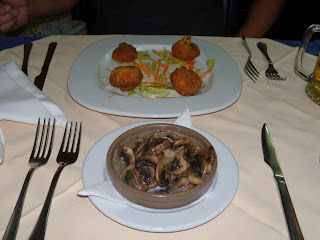 As a starter I had garlic mushrooms and he had deep fried mushrooms.
I tasted a small piece of his mushrooms and they were as good as mine. 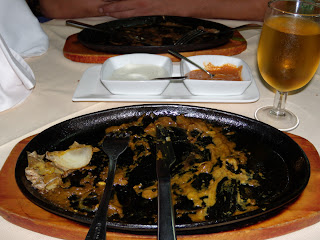 Like many times before I forgot the camera when we got the main course in.
It was anyhow very delicious as you can see when the plates are empty.
He had steak and I had chicken.
We were so stuffed that we couldn't fit any deserts in.

After the meal we went to one of the neighbor restaurants called First and Last.
My boyfriend knows the compare who is working there.
I even sang a song there; Any man of mine with Shania Twain.

After that we went over to The Moonlight bar to listen to the act of IS.

Later we went over to restaurant Soul Divide that is downstairs at La Karina to see the manager.

After that we went over to Los Cristianos and spent the rest of the night at The O'Jangles Irish bar.
I also sang a song there; Poker Face with Lady Gaga.

We visited five different places in the same night and got home about 2.30 in the morning.
What a pub crawl!!! A great night!!!

I have made a short video clip from the 'party' at O'Jangles bar.
It was such a good atmosphere and many were dancing.
The most of the people in the audience are living and working here on Tenerife.

The artist is called Mikey Mike. He is a real good singer and have even won awards here on Tenerife for his entertainment. He sometimes entertain together with IS and right now they are nominated for the best duo in the Tenerife entertainment awards.
If you like to listen or vote for them or any other artists on the island you can visit the website of Oasisfm.com