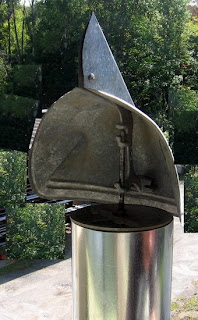 A 'Hot top', quite similar to one of the models I sold.
Last night was nice.
First I went out for dinner to Little Italy.
(Sorry, Clas has borrowed my camera and because of that I haven't got any photos).
There I met a man from Italy with who I probably will do some business in the future.
Without knowing each other we just happened to meet at the same restaurant a week ago when I was having dinner there.
We started to chat and the man is now interesting in me joining one of his businesses. We will meet again Monday and after that i hopefully know more about how it will be.
Later in the night I went over to Scandibar for a couple of hours and came home around 12 o'clock in the night.

Before i met Clas I was more like a business woman.
I have always loved to do business but this disposition has been put on hold the last years and I have been more into music, which also have been nice.
I think 'to everything there is a season, a time for every purpose under heaven' and I don't regret anything. If you do things in the right season you will always enjoy them and I will, irrespective of what I'm up to, always be a singer too. I love to sing!

Anyhow, I now start feeling for doing some business again.
I will for sure become more active as soon as the right projects crop up.
I have decided the projects have themselves to come to me.
I will not 'look for them by using candles and lamps', like we say in Swedish.
If there is a business that is meant to be done by me it for sure will come to me in the right time and the doors will be opened and it will be successful. I am not interested in forcing myself into anything when i know if it's not meant to be it will just cause me problems and a lot of effort and it will not bring the prosperity i hope for.

About twenty years ago I was a partner in a company in Finland called Malax fastigheter Ab.
We bought apartments, houses and business properties, made renovations and sold them out. This business came to me in a supernatural way.
I was just sitting in a bar drinking coffee and some of the most well known businessmen in the area showed up at the table next to me and asked me to join them in their new company.
They said they needed me because they thought i was such a skilled salesperson and I was even offered to be the chairman for the board of directors which I felt was too much. I was only 25 years old at the time and thought they all had more experience than me, but decided anyhow to give it a try and joined the company.

I was at the time running two businesses.
One was a makeup/color analysis company in which I imported make up in the right shades from Germany, that I sold to my costumers. I made analysis on the customers and told them which colors would fit them + gave hints about makeup and hairstyles, taste in clothing, jeweleries, eyeglasses etc.
I also arranged makeup classes and kept shows in different associations and the local television and the ferries that traffic between Sweden and Finland even made special cruises with my business as a theme.

The other business I was into was that I was selling non-corrosive 'Hot tops' for the chimneys to the property owners.
A 'Hot top' is like a wind weather vane that among other things avoids the smoke to get back into the chimney, protects it from the rain, causes a stronger draught and is saving energy, which means money. Rain + soot = acid which causes the chimney to start decomposing.
I sold a lot of Hot tops and they were a hot topic in the discussions between the men.
When you were driving the car through the villages you could see who had it or not and I turned out to be a little of an ' chimney expert' with who the men gladly discussed the chimney.
He,he! I have been climbing up to the chimney of many houses, with the house owners, just to look at the 'problem' and to help them install the 'Hot top'!!! That was sometimes a part of the 'sales show'!

The property business that I joined also turned out to be prosperous and Tor Knuts, who is a well known business man in the area where I come from, was like a mentor to me.
He knew how to run this kind of business and I enjoyed so much to work with him.
It was so exciting to do speculative purchases and it's for sure one of the must fun businesses I have ever been up to. The gambling in it makes it very exciting.
Later I met Clas and we started up a recording company and I didn't have much time to do property business anymore and before we moved to Florida I sold my shares in the property business company to the other owners.

Oh, I get so excited when I write about these lovely memories.
Hopefully I will soon be into some business again.