I have got a National lottery ticket! 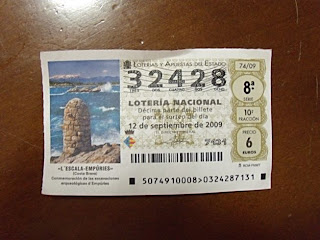 A retired officer from the Spanish navy, here on Tenerife, likes our music.
He lives in Sta Cruz and goes by the bus almost every night down to Los Cristianos to come and listen to our music. (at least 5 nights a week!)
The bus trip one way takes about an hour.
It takes him a lot of time when he leaves by bus from Sta Cruz around five in the afternoon and return by the 3 o'clock bus in the middle of the night.
When he comes to Sta Cruz, after 4 o'clock in the morning, he goes to one of the cafes to have a cup of coffee with the fishermen ...and then he goes to bed to sleep a few hours to come back to Los Cristianos again in the afternoon.

The other night he had bought a lottery ticket to me which I'm going to check after the 12th of September.
There are many people selling these National lottery tickets from small boots on the street here on Tenerife and you can win a lot of millions if you have good luck.
It's the first time I have got one and of course I now hope for good luck.
at 18:13