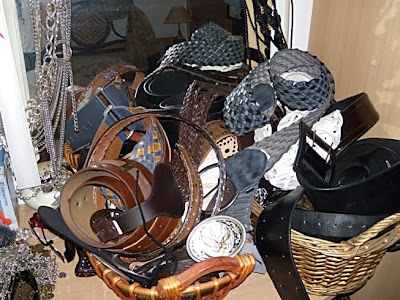 I have to organize my belts again tomorrow.
It only takes about a week and then they are in a mess again.

I am really in a need of a good belt organizer but I haven't seen any here on Tenerife so far.
In Sweden they often have good practical items that solve all kind of problems and I will check out Ikea next time I visit.
I think they have got a big plastic belt hanger with a lot of holes in that could make it.
Then I can hang the belts in the different holes, depending on what color they are, and the problem will hopefully be solved.
I threw away a lot of belts last time I put them in order but it didn't help much like you see.

To be honest with you the smaller basket was for Clas' belts in the beginning but mine has somehow taken over both baskets now.
I tried to hang some of the belts along with the outfits in the wardrobe, but some of them have moved back to the baskets again.
It's really a mess and I start getting fed up only by looking at it.
at 02:06