The mosquito here on Tenerife is really a monster.
It bites terribly!
A while ago when I was sitting here at the computer, with my feet on
the top of the desk, one landed on one of my toes and bite me.

*Hawk* The feet on the desk...?
Yes, I know it sounds like being very much "bumpkin" to keep them on that level... acting like Pippi Longstocking or something...but that's how I do it while I'm on the internet in the nights.
I'm just honest with you.
It's only because it feels relaxing for the legs.
They need it after the line dancing that I do every night.
Clas don't mind anyhow. He's so used to it that I think he don't even notice.

Now, about half an hour after the bite, it's still itching and I feel so
frustrated that I almost will start climbing the walls.
The bite hit straight on toe number three on the left foot.

Hopefully I'll see the monster again soon.
If I do it for sure has seen it's last day!!
I think it's time to go to bed. Good night! 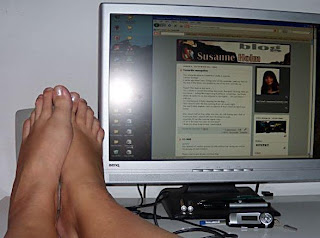 I took a picture to show you.
This is just how it looks. Not bad at all!
But, sorry, I haven't had any pedicure lately.

Norm said are you sure it wasn't Clas nibbling at your toe . Hee Hee