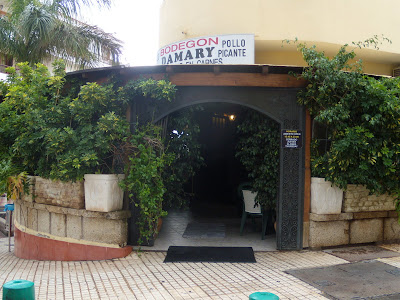 Like you already know I've got a new hobby with Brito. About three times a week, or more, we go out and try new Bodegas and Guachinches here on Tenerife.

Today it looked like it was raining cats and dogs up in the mountains and because of that we decided to have a lunch in Adeje, which is on a lower altitude.
Some English friends of us said they visited this restaurant about a week ago and I liked to try it.
Brito has been dining many times here before, his son has been living in the neighborhood of this bodega, but for me it was the first time.
The meal was delicious and we will for sure be back.

We had the Adeje chicken a la Bodegon Damary and it was a little different from the other Adeje chickens which have got a strong taste of garlic.
The chicken pieces have got the same crust but I guess the taste is based on red vine vinegar when they have got a red shade. Maybe they prepare them in a red vinegar marinade before they cook them? It's only a guesstimate I've got! 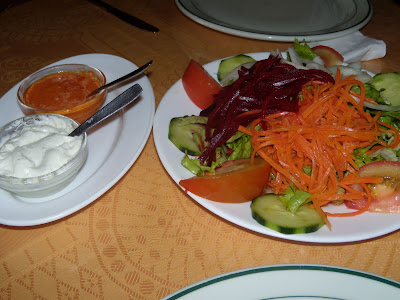 First we had salad, bread and mojo sauces.
It's a must for me to try the mojo sauces in every Bodega or Guachinche we visit.
It's like the wine. The taste is different in every place.
The red one was very hot in this restaurant.
In my point of view it has a taste of roses and tobacco. 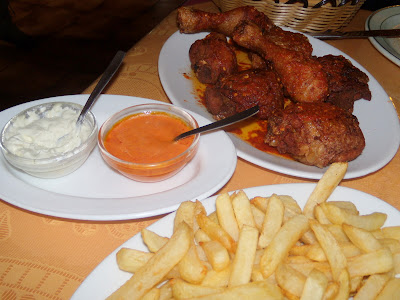 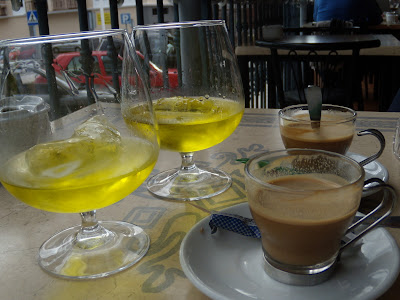 After the meal we went to an other restaurant in Adeje where they make their own 'Orujo'.
Sorry I don't know the name of the restaurant...
It was anyhow delicious but maybe less strong than the one you can buy in the shops.
Orujo is a liqueur that the Canarians drink after a big meal.
It's like a 'Jagermeister' a la Canarias' and it speeds up the metabolism and is made of herbs.
It's good for your stomach and at the moment I like to have it after our big meals.
I like the taste, but in the beginning I thought it tastes like the 'moonlight spirits' of Finlandia.