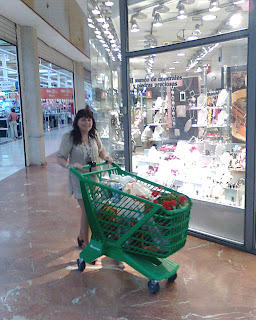 Me at Alcampo today.

We have been to Sta Cruz shopping today.
I bought a dress, 2 skirts and a vest + some jeweleries and Clas bought 4 shirts to use on stage.

When we got home in the night we had a grill party out on the balcony.

After the meal I watched the "Benidorm" Special video that we got as a gift from Mick and Frances a couple of days ago. Clas watched it directly after we received it in the mailbox.
It was as good as the other programs in the series and I recommend you to watch it.

We'll have a new schedule at La Karina from next week.
We are off on Monday like normal, but after that we'll play every night except Thursdays when it's flamenco show.
Cecil who is normally having his Jamaican show at La Karina three nights a week is going for vacation and we will cover his nights.
This means we will now play six nights a week at La Karina, the restaurant that is close to hotel Sol Tenerife in Las Americas.
at 23:37