Oh, we hardly can't move normally anymore!
But we just keep on playing and dancing at La Karina like nothing has happened.
It would just make people worried if they knew how we look under the clothes and because of that we keep it a secret.
Except on our blogs and on the Facebook, of course, where we tell the most of everything.

Now it for sure will take a long time before I go to the beach again.
The stupid thing, like it seams, is that this happens to me every summer!
But next summer I will remember it! *sigh!*

Remember to use at least number 30 of sun protection when you come to Tenerife in the summer time.
And don't stay on the beach for longer than two hours at the time, or hide under a parasol!
It's really like being in an oven!!
The lovely calm breeze from the Atlantic ocean fools you to think it's alright and suddenly you look like a grilled pork without knowing anything.

Sorry! These pictures don't look nice, but I decided to show you anyhow.
Maybe it can be a warning to somebody who is on the way to Tenerife or any other similar place in the world? 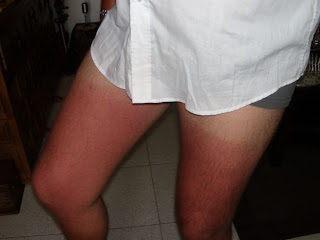 Poor Clas! He has now only got one pair of pants that are big enough so that he can wear them on the stage. It would look terrible if he had to wear shorts on the stage. Wouldn't it? 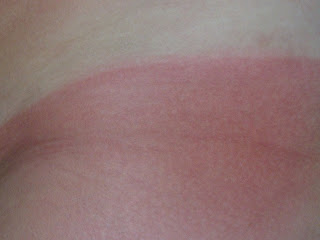 The outside of my thigh. I can't hardly wear any skirts and it's now a problem every night to find an outfit that I can wear. But I know it will become better after three days. That's how it has been during the past years.
at 02:05