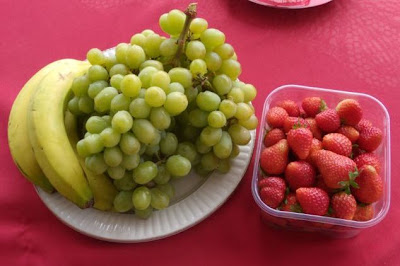 I even found strawberries today!

I watched a few programs called "Lyxfällan", over the internet, from Sweden (TV3.se) last night.
Translated to English the program would be called "The luxury trap".
It's anyhow about people who waist a lot of money without thinking about it, and then two experts of economics come and help them to look at their finances and help them to start shopping in a more economical way and to save a lot of money.

Oh dear! While I watched the programs I started making an overview about how much money we spend every month and, I tell you, it was a lot more money than I knew!
We could easily spend some Euros less per month and that without living like poor rats.
He,he! Really something to think about in this time of world financial crisis!
But it needs to be said that nor Clas or me do like the people in the programs who take loans to finance their luxury life.
We only spend our own money!

One of the biggest mistake we do is that we don't shop food.
Our refrigerator is empty the most of the time and because of that we go out on town all the time when we like to have something to eat. Exactly like one of the couples in the programs who called the pizza delivery as soon as they felt hungry.
It's easy and quick to do it and you don't get any dishes, but it costs a lot of money!

Here a normal breakfast/lunch for two people cost about 20-35 Euros and it costs the same when we go out and have a night snack when we get home from work in the nights.
If we just would buy the stuff ourselves it would not cost more than 5-10 Euros per meal!
Now you probably think that the food shopping can't be the only way in which we waste money, and I agree...You are right! But I have chosen to focus on the food shopping now...

We always have the dinners at the restaurant in the nights, before we start playing, and that means we never have to make a dinner, which is nice.
Because of that I think we are not allowed to complain if we have to prepare the other meals ourselves. Don't you think so too?

Now there's gonna be a change!
Today I have been out shopping a lot of food and fruits and we had the night snack at home tonight and it wasn't bad at all.
My hope is now that we will be able to keep the refrigerator filled and in that way save a lot of money. But there is a big problem and that is when you hardly can't find anything nice to buy in the shops here on Tenerife. It's not like in Finland!

When I shop food in Finland I find a lot of stuff that I long for, but here the most of the stuff don't taste good and we are already fed up with the most of the good things you can find.
I don't promise that we will make it and save money, but we will make a try and hope for the best!
Please, keep your thumbs up!
at 00:33