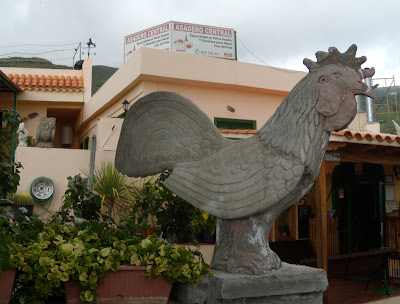 The restaurant looks like a private home from the outside and
it's only the sign on the top of the roof that tells you it's a restaurant.

Yesterday I had the best chicken ever here on this island. I also like the Adeje chicken that has a taste of garlic, but this one had a very nice smoke taste from the charcoals in the grill which made it very special.

I went with Brito for lunch up to a small village called Valle San Lorenzo.
The restaurant is called 'Asadero Central' and I think you can't find it on your own.
Somebody must go with you the first time and show you where it is.
We were driving on a very small road out from the town, it's not in the center of Valle San Lorenzo, and the restaurant looks from the outside like a private home.
Oh, I like so much to go to these places and I'm so happy Brito prefer to eat in these kind of restaurants and that he ask me to join him.
For me every time is like an adventure and I like it so much. 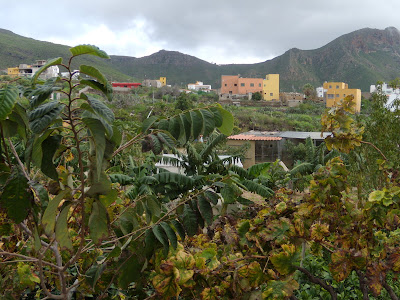 The country of Valle San Lorenzo.
This is the view at the 'parking lot' of the restaurant. 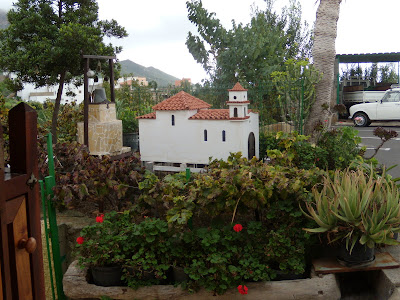 There's a small copy of the church of La Orotava in the yard. 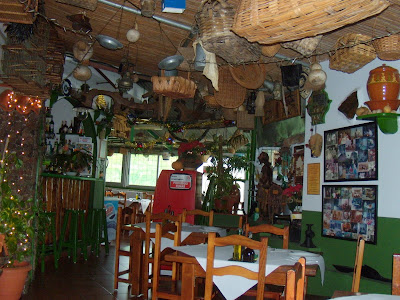 Inside the restaurant.
The ceiling is decorated in Canarian style with a lot of baskets and stuff. 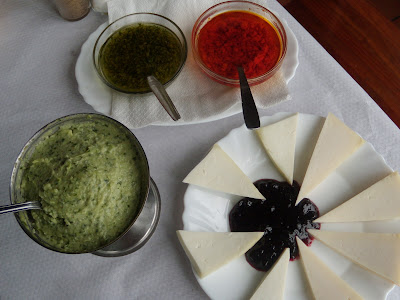 We started with my favorite cheese, like always.
The taste of goat milk, which is a taste I normally don't like, is very mild.
The cheese is called 'Queso de cabra' and it's made by the local goat farmers.
It's a little bit like with the local wines; the taste and the consistence can vary from
restaurant to restaurant but all the cheeses I've tried so far have been very nice.
You can buy this type of cheese in the shops but it's not really the same when
it's made in a cheese factory. To get the right stuff you must buy it straight from the farmer. 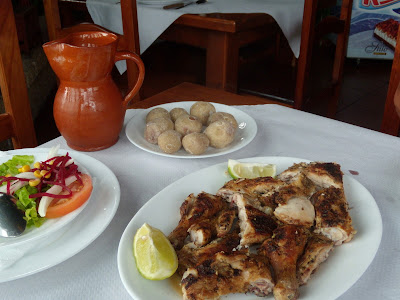 'Pollo Braseado'.
I have never had such a good chicken in a restaurant before.
The taste is just excellent!
As you can see the food is served like in the style of the manors. Everyone take the portion they like to eat from the plates and you don't get a plate on your own where everything already is served like it is in many other restaurants.
It causes a lot of dishes but I like this system when you never receive stuff on your plate that you don't like to eat.