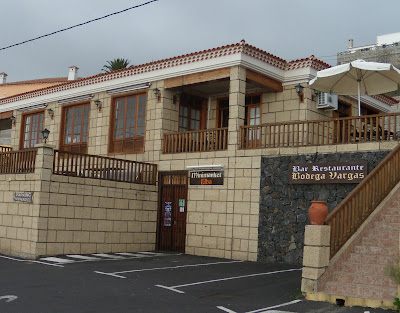 Oh what a day this has been again! I'm so excited! Normaly I'm off Mondays, but I will work tonight... and this day has anyhow been like a day off for me.

Brito picked me up with his car around 2 o'clock in the afternoon and we went up to 'Bodega Vargas', a very nice restaurant up in the mountains, in a village called Vera del Erques.
The meal was just fantastic!

I become more and more spoiled with the Canarian cuisine and to be honest with you I don't really like to have anything else anymore. It's absolutely the best food on the island, but you have to go to the right places to get it.
In the Bodegas, Tascas and Guachinches where we have been eating lately everything is so fresh and nice. I feel like a princess when I get the possibility to enjoy this special food.
It's also very relaxing to get out of the tourism and spend time in the mountain villages.
I would like to get a little 'charlet' (house) up in the mountains in the future where I can go and relax on my day off. We both stated today it's like getting to an other world and it's very good when you like to chill out a little bit.

Oh, my ears are locked at the moment. Many times I become deaf when I get down from the mountains and now it has happened again.
I just hope I will not be too loud with the sound at Lewinskis tonight. 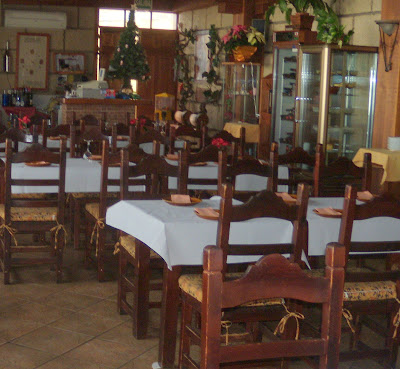 Inside the restaurant. I like this style.
It's Canarian country style. 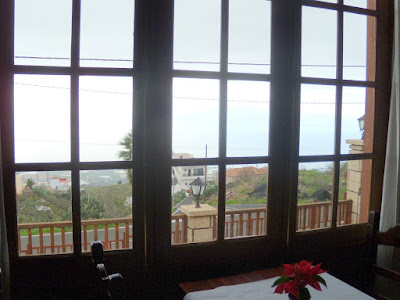 The view is just amazing.
Today the weather was a little bit foggy but we got to see
the neighbor island La Gomera and the Atlantic Ocean while we sat there. 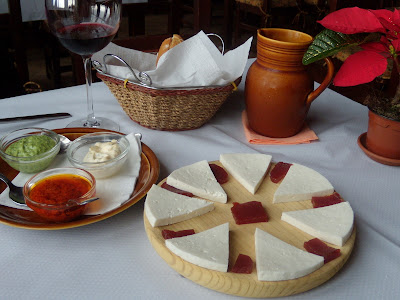 We started with 'Queso de cabra con guayabu' and 'pan con mojo salsas y aioli'.
This is my favorite Canarian cheese at the moment. 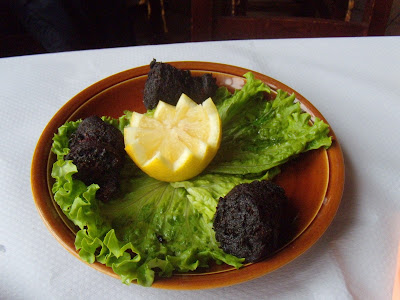 Then we had 'Morcillos'.
This is a Canarian sausage that is very delicious.
The taste is a little bit sweet.
Sorry two pieces are missing on the photo when I forgot the camera. 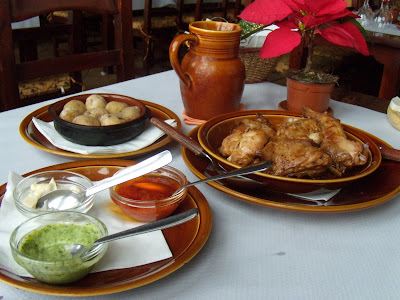 Then we had 'Conejo Salmorejo' with 'Papas Arrugadas'.
He,he! I had it and liked it and after we had finished Brito told me I had been
eating Canarian rabbit. Conejo = Rabbit.
He knew that I can't eat rabbits when I think they are too cute and because of that he had a secret with the waiter, that they would serve us rabbit and let me think it's chicken.
He,he! The waiter must have been thinking I'm stupid when Brito , in the end of the meal, told me in Spanish that I had been eating rabbit and I asked what the difference is
between a chicken and a rabbit. I didn't understand that 'conejo' is rabbit and thought it
was some special type of chicken because he told me we will have chicken.
I didn't understand it was a trick to get me to try out the rabbit, even when he told me!
I will absolutely have more rabbits now. I like it! But, of course, I will try to not
think about the animal while I eat.
I recommend you to have 'Conejo Salmorejo' while you are on Tenerife.
And the cheese and the sausage too!
Everything we had today was, in my point of view, much better than
you ever get at a dinner in a 5 star hotel! 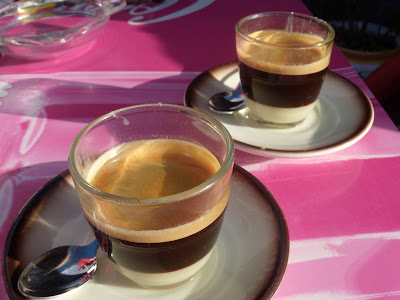 On the way back to Los Cristianos we had a coffee stop in Los Menores.
The coffee is called 'Cortada Condensada'.
It looks very nice when it's served but you have to use the spoon and
mix it to get the right taste.