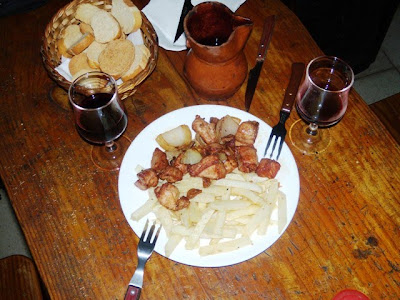 We have had very bad weather here on Tenerife but the nice sunny weather came back yesterday and it's a blue sky and about + 24 degrees at the moment.

Monday, which was my day off, was the worse day and we got rains, thunderstorms and very strong winds.
I had plans to go with Brito, by car, around the island + visit Ikea but we had to cancel the trip. Instead we went on a small excursion here in the south. We visited among other places Lidl in Chafiras and on the way home we stopped at a bodega in Guargacho to have a tapas.

We had Carne Cochino (also called Carne fiesta), which is a typical Canarian tapas meal.
The bar we visited was very spartan and the wine, which was straight from a winery here on Tenerife, was as an example served in a carafe with knocked edges and that had lost the handle a long time ago. *giggle*
Oh, it tasted so good! I like the Canarian wines!
We had a very cozy time at the restaurant when it was a heavy rain on the outside + lightnings and thunders, and the bar had no electricity and the only light was the light from a few candles.

I also got to taste Orujo for the first time in my life.
It's a liqueur that some Canarians sometimes take as an aperitif after the meal.
I think it tasted a little bit of the 'muscha spirits' that people make in their homes in Finland.
I think if you take 'muscha' and mix it with a little bit of herb liqueur you will get a taste that is something similar.

Last night I was working like normal. I had a few line dancers in but it was a quiet night.
The tourism starts going down again now when not many people like to go for vacation before Christmas.

When I finished work last night two guys from England came to see me in my apartment.
They just came to Tenerife for a quick visit (1 day) and arrived yesterday in the morning and left the island today in the noon.
We sat and chatted business + life in general on my balcony til 6.30 this morning and I went to bed around 7 o'clock.
Because of this I have been sleeping the whole day and I didn't get up before 2.30 in the afternoon. I am rested but they must be half dead. They are landing in Manchester at this moment.

Today I have got a soar throat, a little bit fever + a runny nose and it's probably because it was a little bit chilly out on the balcony. 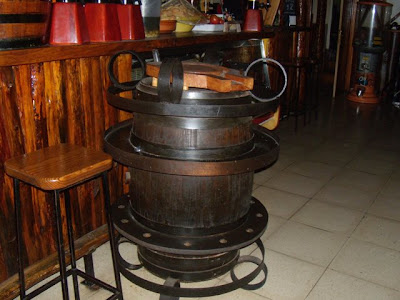 'La barrica´in which the wine is delivered to the restaurant.
.
at 16:18