It's winter on Tenerife! 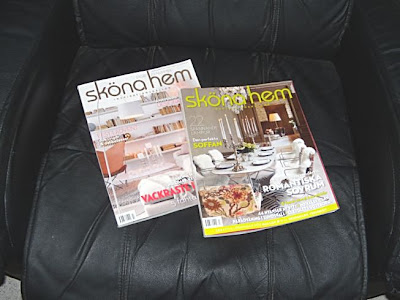 Ann-Mari, a lady from Sweden who lives here on Tenerife in the winter time, gave me these two Swedish home furnish and decoration magazines.
She's an angel! She many times bring me her Swedish magazines after she has read them.
She has also been baking a loaf of bread to Clas tonight!

I like to watch all the pictures in the magazines. Every time I re-read an issue I find new small details in the decorations that I haven't seen before.
I will soon tuck myself into bed and just enjoy all the pictures.

We had the dinner in Las Americas tonight and it's so cold that we both got stiff bodies even when we were dressed in winter clothes with jackets and everything.
It would have been nice to wear gloves but we didn't think about it before we already were out on the street and then we were too lazy to go back in to get them.
It's so chilly that the bones are aching even when I'm not a rheumatic person.

I remember when we lived in Florida 1996-97.
One Sunday morning it was only +16 degrees.
Our pastor was so excited when the church became crowded.
He thought nobody would go out when it was so cold.
We thought at that time that +16 is quite warm. But now, when we have been living here on Tenerife for many years, we are the same.
When the temperature goes under +20 we hardly can't move anymore.

Clas checked out the temperature now and it's only +15,1 degrees outside!

Remember to bring warm clothes if you are on the way to Tenerife.
It's winter here now! Or you could say it's similar to what it is in April-May or August-September in Scandinavia.
It's probably snow up on Teide! The vulcan got the first snow about two weeks ago, but I don't know if it has melted away or if it's still there.
The mainland of Spain has also got a lot of snow.

Sometimes the tourists are very obstinate.
We saw people, walking around in Las Americas tonight, only in shorts, T-shirts, and barefooted in sandals.
They will for sure catch colds or at least get persistent coughs. Don't they?
Maybe it's hard to accept that it's winter here when you have payed a lot of money to get to the summer. Poor tourists!

I hope we'll get a sunny day tomorrow. Then it can be up to about +23 degrees.
Clas says we maybe need to bring in the herb plants, that are out on the balcony, before we go to sleep... Good Night!
at 23:33

Hi Clas and Susanne just a quick line to offer some encouragement to you both to try and stay together although that may be hard and also may prove to be impossible but as you say yourself it would be wrong to throw all those years together away without giving things another go.But it must be what you BOTH want and bring you both HAPPINESS.We hope that you can achieve this and hope to see you in January.When we heard the news of Rays sad loss we phoned Debbie and could tell that she was struggling to come to terms with things and we hope that there are enough friends on the island to see her through this vey difficult time.best wishes to you both and hope you can have a good xmas and new year.Mike and Lynn ps (we were at your first night at the Oasis and hope that can continue too!!)