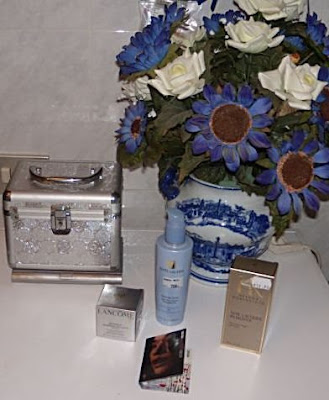 I made a trip to Parfumeria Mego yesterday because my face cleaning milk was running to an end.
It was not a long trip when we have got a Mego shop in our neighborhood, which is very nice.
I buy the most of my cosmetics from them and the girls many times give me different testers and gifts.
I got a tester of a Lancome eye cream some weeks ago and I like the product and decided to buy more of it.

It's called Lancome Renergie Morpholift Yeux and it's lifting, firming and anti-wrinkle in the same time. (49€ on Tenerife, for 15ml, 0,5oz.)

It says; " Immediately, thousands of micro-tensing actions leave the skin feeling lifted and smoother. After four weeks, puffiness appears diminished, dark circles are less visible, and wrinkles appear reduced". Sounds nice. Doesn't it?
I have used Lancome High Resolution Yeux before but will try a tin of this one now.

I also bought Helena Rubenstein Nail Lacquer remover and tried it about ten minutes ago, before I started making this post. I think it's gentle and effective. (19,70€ for 100ml, 3,3oz.)

The brown thing that looks like a book is a perfume tester of Flower by Kenzo that I got today.
I had that perfume about two years ago. It smells nice after 10-15 minutes.
The smell is really strong first when you put it on but after a while it's lovely.
at 02:17