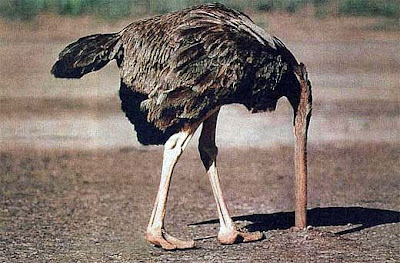 Clas many times says that I am like a butterfly flying back and forth and up and down in the air while he himself is more like a wet log laying in the water and that just move slowly in a straight direction if you kick on it.

He is right, but I also think he is like a ostrich that bury it's head down in the sand waiting for the storm to fade out. He is very caring in the daily life but when something less fun happens he just bury his head and is not available. Then I have to take care of the problem myself to get it solved.

I was really chocked one night when I was blogging after we came home from Lewinski.
Only about a couple of feet from where I sat I suddenly saw two long antennas moving slowly back and forth sticking out behind a shelf.
I jumped up from the chair and run out to Clas on the balcony and told him there's a big cockroach in the studio and asked him to come and kill it.
No reaction! He was just sitting there puffing in peace on his cigar like nothing had happened.

I understood it will just be a waist of time to try to get him into action, but tried one more time to beg him to come and help me using the most kindly voice I could bring up.
But he just blew out the smoke in a long squirt and told me to just take the spray and kill it.

Sometimes I wish he would be more like a cowboy riding in high speed on his horse coming to help me when I'm in danger. *sigh*

I went into the kitchen and got the spray bottle and walked quickly back to the studio hoping it hasn't disappeared. Knowing there's a cockroach somewhere in the house would cause me a sleepless night.

Good luck! It was walking on the floor and I spayed on it two times and run out and shut the door. I was so scared that I had difficulty in breathing and decided to go to bed.

After a while Clas also went to bed and I felt lucky when I really needed his presence when I was so scared.
It took about 2-3 minutes then he already was sleeping! He was breathing deeply and slowly like nothing has happened, far away in sweet dreams. He was totally unmoved by the incident!

I had to lay awake for hours because I was so afraid and thought all the time that there is a cockroach walking up onto the bed and onto my pillow.
It's terrible to have this kind of phobia.

Many years ago I had phobia about lifts. I was very scared to use a lift and as soon as it stopped and the door went open I screamed and jumped out and many times I walked the stairs instead.
It started when I was about ten years old and had been watching a movie about a burning skyscraper. I was too young and wouldn't have been watching it. It gave me nightmares.
I am healed from that now and I always use the lifts today without any problems.
Hopefully I one day will be healed from the phobia about insects too.
at 08:48

I don't see an ostrich in that story, coz I'm not afraid of no roaches. But I can see the wet log. ... You see - I was slowly on my way to rescue ..... but you, the butterfly in this case acted faster.

Let's have a silent minute for Pedro and his, now widow, Maria and their 212 kids ...