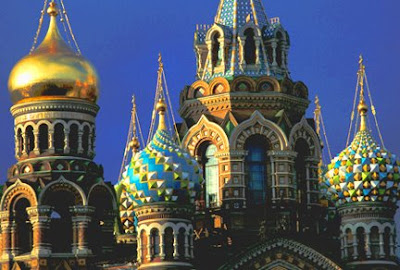 St Petersburg, Russia.
I have been many times in Russia and I love the Russian people.
The first time was 1995 when I went there with humanitarian help. Stuff that had been collected from the Finish people by a TV-program I was hosting and producing.

My last visit was 2002.
Clas didn't like me to go there any more when we every time got a lot of problem with the customs and there was a risk we wouldn't be let out from the country.
The same happened with my friend Ljuba who was doing the interpreting. Her husband didn't like her to go either so we had to quit.
But I have got lovely memories from our humanitarian convoys and today I laugh at the problems when think about all what happened. It was really adventures of a life time!

The Russian customs is quite corrupted and it's not easy to get in with help to the people that have got less in the society.
They are very inventive and like to make up different tricks to earn money "under the table".
Probably a remnant since the communism, but at that time they were satisfied with some packages of coffee, a loaf of Marlboro or maybe silk stockings or chewing gum.

There's a lot of things that can take place at the Russian customs.
They many times like to keep the stuff you bring and lock it up in a storage and charge you a rent for the space you use.

Sometimes they like to have some kind of special certificates or stamps that they for sure know you haven't got.
One time they asked for a certificate that prove what kind of detergent has been used when the donates have been cleaning the clothes before they have been giving them away for charity. Were can you get a certificate like that? It's impossible!

When you get back with the certificate (you can probably write one yourself and put a stamp on it and they are satisfied), more problems appear.
Then they start telling you that you are a smuggler by showing perfume bottles they have found among the clothes. You have written clothes and shoes in the import form and then you are not allowed to bring perfume.
They have of course put the perfume bottles there themselves but you have to pay what they ask to get the problem solved or end up in the courthouse.

I can't start telling you all the tricks they do but I will tell one more.
They can write different expire dates on the visas for the vehicle and the person driving it.
The numbers are written with Russian letters and it's not easy to discover.
When you are ready to leave the country they tell you the vehicle has been in the country without permission.
Then you again have to pay, let's say, a couple of thousand Euros to not have to go to the courthouse.

You have to collect stamps from all the hospitals, children shelters, prisons etc. that you visit to prove the stuff you bring has reached the right receiver.
I heard once about a man who had a lack of a stamp (he forgot to ask for it) and he had to stay 21 days in the customs house waiting for the right stamp when his visa did expire.
They didn't let him out from or back into the country and the relatives had to work hard to get food over the border to bring him something to eat, and to bring him an new visa that was valid so that he could leave the country.

Putin is a hero for me, like he is for many Russians. He has made a great job and many Russians who lived in poverty before have now got money and have become rich.
Some of the old people in Russia like the system of the communism more and mean they had food on the table before. But the new regime that came after the perestroyka allows the people to own companies and to do business. Before everything was owned by the state.

I think it was the best way to get the country out of the extreme poverty that was holding the people in great suspense.
Of course, everyone can't handle the new system and there are still many poor people who need help to survive, but they are not in majority anymore like before.
Today the Russian tourism is growing avalanche-like on Tenerife.
at 13:11

Russia is the largest and most powerful of the states to emerge from the former Soviet Union. As the seat of the Soviet empire that existed for over 70 years, the Russians wielded tremendous power both within the U.S.S.R. and in the international sphere.
----------------
Tanyaa
Advisor