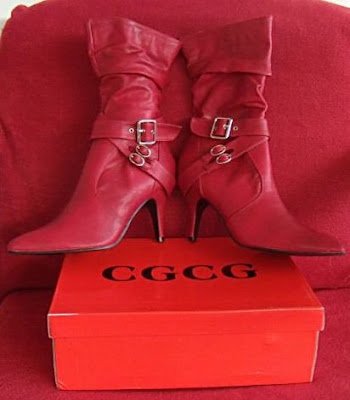 Last night I used my new red boots for the first time.
Oh, dear! I felt like a "red sock" the whole night!
In Sweden they call the feminists "red socks". I don't know what's the matter but I suddenly started feeling selfish and proud like I have got all the answers of all the matters in the world.
And I felt like my nose was held up high the whole night through so that I had to try to keep it down all the time.
He,he! I banter a little bit but it was a crazy night!
My red boots stole the concentration.

Maybe it sounds stupid but sometimes clothes can disturb your personality and you will be a little bit distracted while you use them. Or is it only me who is filled with prejudice?

If I wear a skirt that is quite short I feel like a prostitute the whole night and I only think about the time when I can go home and get ride of it.
I think some of the ladies are looking at me in a degrading way and I believe their men are staring at my legs and I have to keep up the discipline to not start acting like a silly woman in protest.

But I have learned where the limit of the skirt length goes now and I don't buy very short skirts anymore. The time of prostitution has passed and I'm so lucky for that.
Thanks to the criticizing women and to the cheering men!
But to be honest; I never were striving for the cheep look! The whole thing was made up by some of the guests that were little bit more pious than me!
Maybe you can call it a culture shock? *smile*
The people tend to put their limits on different levels. That's the problem!

Today when I wear a skirt in a model of short I avoid to pick up anything from the floor and ask Clas to help me instead. Everything to not seam to be too simple.
The years pass too, and I start more and more feeling like a woman which means the skirts get longer even when I still prefer the short ones.

What about the future of my red boots?
I have got an idea now that I ought to use them with white jeans. Then some of the red color will be hided under the trousers legs. Maybe a clever idea? We'll see!
at 16:25