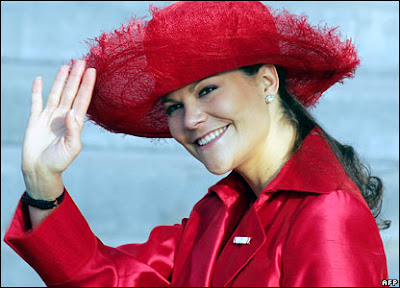 The crown princess of Sweden, Victoria, did make a state visit to India last week.
On her way back to Sweden the people at the airport took her to the wrong terminal and she didn't get in time to the plane.
The plane was waiting, of course, but when she finally entered the aircraft she was booed out by the other passengers.
It's told she had to carry over ten bags herself while she was hurring to the right terminal.
Normal passengers can only have one carry on in the cabin, but when you are a VIP you can still have many like it seams.

This reminds me of our travel when we moved back home to Finland from the US.
A lady we know, who works as a travel agent at Finnair, arranged some kind of VIP tickets for us when we needed open tickets during our one year stay.
I don't know how it's now but at that time (1996) you had to have an open flight ticket during you Visa stay in America so that they could send you home directly if you did something criminal and had to be deported.

I called Finnair at the Miami international airport some days before our departure back to Finland, to check out if we could get all the luggage with us on the flight. We had a luggage of 165 kg (364 Lbs).
They said it was alright but we will have to pay about 400 dollars extra.

We were quite dressed up the day we were about to travel home. Clas in black pants, white shirt, tie and red business suit and I had a nice skirt and a blouse with a nice red jacket, model posh, on the top of it.

The lady at the check in desk looked at our tickets and then she made an excuse and went over to an other lady who seamed to be her boss.
The boss lady came over to us and started doing the check in.
It was a lot of suitcases and we even had a big American trunk that was so heavy that you almost couldn't get it moved. It was really out of size, when you think about the measures that are allowed at the check in, but everything went so smoothly and we finally only had to pay 80 dollars for the luggage. Why the price was reduced to such a low fare we don't know.
Are the fares different for VIP people? Or can you have more luggage as a VIP?

The flight was delayed by an hour and we sat down to wait in the terminal.
After a while some of the passengers were told to go on board first. We checked our seat numbers and discovered we were the ones they were talking about.
The aircraft was a big new MD11, and we got really big seats with a lot of space for the legs, in the front of the plane where the first class department is. We even had a telephone each at the seat and the service was excellent the whole travel.

When we arrived in Helsinki we were still delayed and we directly run up to the first Finnair desk we saw to tell them we are booked on the next flight up to Vasa. It was only about ten fifteen minutes left and the plane would leave.
They asked for our tickets and when they saw them they called and told the plane to wait.

Oh, what a mess! We had to hurry over to the domestic flight department and it was not easy when we had a hand luggage of about 60 kg (132 Lbs).
They allowed us to take some of the stuff as hand luggage in Miami when we wouldn't like to loose it or thought it would probably be destroyed if it was put among the main luggage.
I had among other things two big pictures in wooden frames, collectible dolls, silver cutleries for twelve people, a lot of jeweleries etc.

When we finally got to the plane, about half an hour too late, the next problem appeared.
They almost started screaming at us when they saw our hand luggage.
We had too much hand luggage and there was no space for it inside the aircraft.
The plane going up to Vasa was in a smaller model and they had to open up the luggage space for the second time which caused the flight to be even more delayed. They had already got our check in luggage on board and had closed the luggage door thinking it was done.
Oh, I felt so put on shame and thought it's typical us to mess everything up.

We were told to go into the aircraft.
The plane was really packed and it was a lot of men in suites sitting there. Maybe they were going to the big factories in Vasa and now they would be too late to their appointments only because of us?
If the looks would have been able to kill we would have died. They were so angry.
They didn't boo, because Finish people are very reserved, but I'm sure there wasn't one single smile in the whole plane and the atmosphere felt real threatening.
The worse thing was that there was no free seats left and Clas had to sit the whole flight with his face turned toward the other passengers in the front of the plane. What a shame!

When we finally got to Vasa there was like a "welcome committee" of friends waiting at the airport.
When we got out from the costumers check they were standing there singing welcome songs getting the music from a stereo.
We were probably cursed by some of the other passengers, but we were happy we didn't miss the flight when our friends would then have been standing there in vain, waiting for us.

I don't know why, but many times when we fly somewhere we have been messing up everything at the airport.
We have forgot bags on the luggage band, been so late many times that the staff has been screaming at us telling us to run to the aircraft. We have been sitting waiting at the wrong gate almost missing the plane, many times we have got too much hand luggage and have had to repack some of it and check it in instead etc.
Don't plan to go on a vacation together with us! It will probably be like a nightmare at the airport! We are ourselves so used to it that we have become toughened.

But a good thing is that many times when we have been traveling by scheduled flights we have been upgraded to the first class even when we have booked economy class. We are so used to it that we almost expect it to happen every time.
We think it's because we always dress up when we travel.
It seams like the first class seats seldom are sold out and when they have to place some of the economy people to sit there instead they probably choose people that are dressed up instead of people in daily clothes.
Dress up if you like to get better dinner on the scheduled flights and sometimes even more space for the legs. With a good luck on a big aircraft you'll make it!

Oh sorry! This post turned out to be the longest one ever.