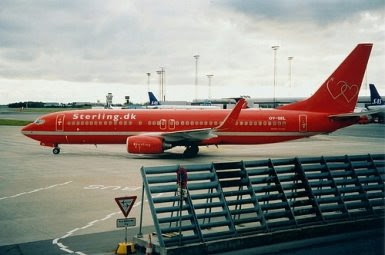 I wonder how many times we will face tourists being left here on the island this coming winter when the air companies run out of money and have to quit.

Some weeks ago (Sept 15) a company called XL Airline crashed and some of our guests didn't get back home to England.

One lady was offered a new return ticket for £700 and decided to stay for one more week when it would help to get down the price.
Some of our guests at Lewinski also arrived later than planned when they had to find new tickets to get here.

XL-Airlines had 21 flights per week going to Tenerife south from England, and it causes a fall in the amount of the tourists here now, even when some people have bought new tickets from other air companies.
They also had many flights every week from Scotland.

Now it has happened again! The Scandinavian Sterling Airlines gave up last night.
This company has flights to Tenerife in the winter time but we don't know if they had started the season yet.
However we haven't met any stranded passengers of Sterling here so far.

It looks like it's can be a tough winter for the tourism here on the island, because the experts say they expect 25 more airline liquidations before the new year.

Lets hope Monarch Air Travel are safe. This is the Airline that we use most often to travel to Tenerife.
Its worrying these days what is happening to our world ?.
It is sure to have an affect on people spending on holidays and that is going to mean less visitors for you in Tenerife. It just snowballs.
When do we hear your secret ?.
Waiting patiently.
Best wishes
Sue

Hi Sue,
I will tell you as soon as we know how it's gonna be.
Best wishes,
Susanne