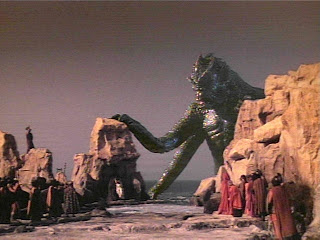 Today, the 15th of May, Warner Bros Pictures fly in a 350-strong production team to work on the island for the next coming three weeks.
There will be big stars like Liam Neeson (Schindler's list) and Ralph Fiennes( The English patient) and many others.
The team is also hiring about 100 local people for various scenes.
It's predicted that the contract will earn Tenerife about 2.5 million euros in revenue because of expenditure on accommodation, transport and maintenance.
Nearly 20% of the total of the film will be shot here on Tenerife.

The movie will be released early 2010 and is called "Clash of the Titans" and is directed by Louise Leterrier.
It's an adventure filled with epic which tells the tale of the war between men, kings and the gods.
Based on the cult 1981 film with the same name, the storyline revolves around the myth of Perseus and his quest to save Princess Andromedia.

Keep you eyes open if you are on Tenerife the next three weeks!
You might see real Hollywood stars, and if you visit Teide you also might see the film team working.
at 14:48