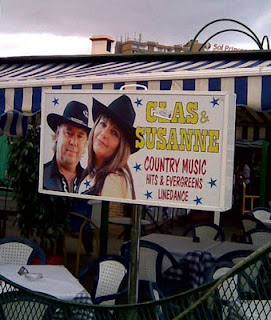 There are no signs with us anymore at La Karina.
Please, don't think that we are not gonna play the nights when we ought to be there!
The police have again forbidden us to put up any signs.

We think it's not fair when all the other restaurants have signs.
But we can't do anything about it. You have to obey the police in Spain and when they say something it's like a law. If you start question it you'll probably get more problem.
It's not like in Scandinavia where the police have to act in fair and you can complain about it if they don't.

We don't know why they are acting like this, but maybe it's because La Karina now is one of the most crowded restaurants in the south of Tenerife.
Many nights there are a lot of people standing out on the street watching and waiting to get in and the surrounding restaurants are almost empty.

It's not the first time we get problem with the police.
Last year they took or signs at Lewinski and locked them in behind a fence in a village called Busanada and we had to pay to get them back.
And they were complaining about the sound all the time and we couldn't almost have any party in the end of the nights when the volume had to be so low that you couldn't get any party feeling at all. It was very boring to play because of this and we felt very sad about it.

They said the signs were standing on the property of the government even when they did not!
Both our signs were hanging on the fence of Lewinski and didn't even touch the ground and they were about 5 meters from the sidewalk with the lawn in between.
Lewinski was the most crowded restaurant in Los Cristianos at that time and many said it was because of that we got the problems with the police.

Clas went to La Karina today and took away our sign to be sure it will not disappear.
The restaurant owner is now moving us three nights a week to play at his other restaurant, La Karina Country, and we will try to put up our light sign there instead. :-)

La Karina Country is not far from where we play now. It's located between Hotel Andorra and Hotel Vulcano at the path going between these two hotels.
The restaurant reopened about two weeks ago and was before called Tuscany.
The menu is the same as at La Karina and the restaurant looks nice when the owner has made a renovation after he bought it.
More about which days we'll play in next post!
at 16:01