Some people think it's very important that you know the Spanish language when you live in Spain.
Specially when you have lived here for almost five years like we have.

To be honest we don't speak Spanish properly yet even when we use the language almost every day. The most of our friends are from Scandinavia or England and we speak much more Swedish and English than Spanish.
We know many Spanish talking people, but we also speak English with them when they know the language well.

Many times when I have started a conversation in Spanish in a shop they have changed to English and because of that I have learned that the most of the people you meet in the town can speak English and they like to do it.
It's almost only the old Canarian tribe who still think that everybody must talk Spanish.

One of the men who is working behind the meat counter in a shop here in Los Cristianos has, like it seems, decided he will teach me how to speak Spanish properly. I think he is from the old tribe.
Every time I say something wrong he directly corrects me with an authoritarian voice.
This is an example of how he serves me:

I say; -Un pollo pechuga, por favor.
He corrects me with a harsh voice; -Un pechuga de pollo!
and looks like he thinks "Madre Mia! She hasn't learned yet how to speak correct".
I say;-Si, un pechuga de pollo, por favor, with a smile on my face, looking satisfied when I have learned something new.
When he is ready he asks;- Algo mas?
I say; -No, algo mas.
He directly correct me and says; - Nada mas! And now he sounds like he's ready to give up.
I say; - Vale! Nada mas! Looking like I don't know anything , but laughing on the inside.

Last Christmas there was a new man working behind the same counter and when he heard how this man spoke to me, a customer, he started giggling hysterically trying to not show how radical he thought it was.
I just kept a poker face and looked like I didn't know anything and like it has never happened before but I laughed like crazy on the inside when I saw his reaction and I'm sure so did the man.
You know, this is Spain and the show must go on! *smiling* 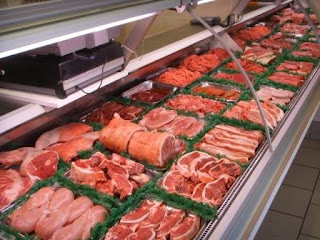