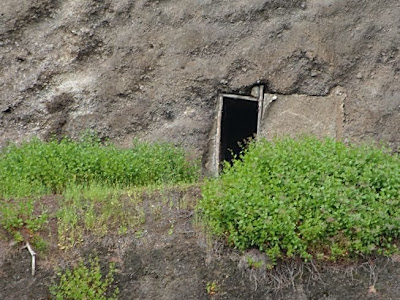 We stopped at this cave yesterday, but didn't go in to it.
You should under no circumstances be tempted to enter an unsupervised or abandoned gallery on Tenerife because it's mysterious appeal can prove a killer.
This is a warning published in the last issue of Tenerife news.

Tenerife has some 1,114 galleries, 77 of which are deemed to present a high risk, 18 a very high risk and 182 an average risk.
Many are not properly closed off, or are in a defective state, or located near populated areas.
Gases have been detected in some of them, either with a high concentration of CO2 or little oxygen.
In fact 36 galleries have been identified as having a CO2 concentration higher than 0,5%.

About three years ago six hikers lost their lives when they were overcome by fumes in a cave in Los Silas.
After this accident an order were given by the government that all the owners of underground caves, mines, wells and galleries have to put up proper signaling and closure systems, proper paperwork and exact details of location etc.
The owners are also required to put up a poster indicating potential danger.
Tenerife Cabildo has now been given responsible of checking whether the work has been done or not.
If not the owners will face sanctions and fines.
at 15:37