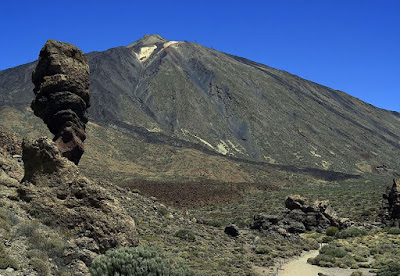 The risk of Teide having an eruption is again discussed in the media here on the island.

The president of the Tenerife cabildo, Richardo Melchior, has now sent a letter to the consejo superior de investigaciones cientificadas, CSIC, saying you can not allow statements like those of the researcher Alicia Garcia, who has recently stated that there is concern about the sientists about the situation due to the activity of Mount Teide and a possible eruption.

Garcia acnowledges that in the next 50 years it is expected there will be a volcanic eruption in Tenerife as during the last century it was once in every one hundred years.

Melchior said at a press conferance that there is no risk of an explosive volcanic eruption and meant that Alicia Garcia's statements are not supported by the other scientists. (Canarian weekly).

When we moved to Tenerife in October 2004 Tenerife was under "yellow flag" for the possibility of an eruption. We are now back under the "green flag"".
There are 4 flags; green, yellow, orange and red.
When it's orange flag you will be evacuated and when the eruption has started it's red flag.
At that time the discussions went high about the need of having an evacuating plan, but the cabildo said it's not cleaver to start talking in that kind of terms when it could scream the tourists away.
at 14:59

Hi!
What's the Teide's situation now? I read yesterday about earthquake near Santa Cruz de Tenerife. Is there some connection to the coming eruption? Is Teide stable still?