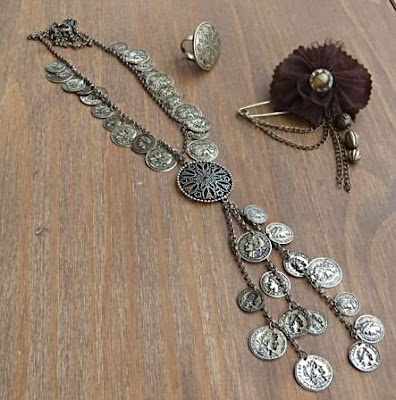 Sorry I haven't been blogging for a long time.
Our internet has been out of order again and I am so frustrated when I can't write the posts when I like. But this is Spain and you have to be patient.
We will now start looking for a new provider when this connection doesn't work properly.

Not much has happened these last days. I have been out shopping a lot of stuff and decided to show a couple of jeweleries that I bought from Stradivarius.
I have bought many new shirts, some belts and jeweleries, make-up, a lot of silk stockings, new socks etc.

It's so popular now to wear tin and brass. The fashion shops are filled with Indian looking clothes that have a lot of fringes and brass rivets and it's popular to wear belts down on the hip and shawls or scarfs around the neck.
I have been looking for fringed boots but haven't found any yet that I would like to have when the most of them have got low heals and they have in my opinion got too much of an everyday look.
I prefer boots with high heals even when I get a lot of warnings, from the people in the audience all the time, when they think it looks dangerous when I do the line dancing on high heals.
I know I'm little bit odd or extreme sometimes but that's just how I am. Or is it the most of the time? I don't know really what's normal in the eyes of different people and cultures.

We were so happy when the tourism came up about a month ago, but last week it went down again when three air companies that bring tourists to the islands went bankruptcy.
We now get over thirty planes less arriving to the island per week and it's not as many tourists as last year right now.
Many people lost their tickets but we hope they will be able to get new ones and arrive later.
Some have arrived already only a few days delayed.
We also met a person who had to stay on the island for one extra week to avoid having to pay 700 pounds for a return ticket to England.

It has been very warm here the last days. Last night it was about 30 degrees in the middle of the night and that can't mean anything else than that a calima is on it's way in from the Sahara desert. After a couple of days we will have a really dusty balcony and I will have to clean everything again. *sigh* 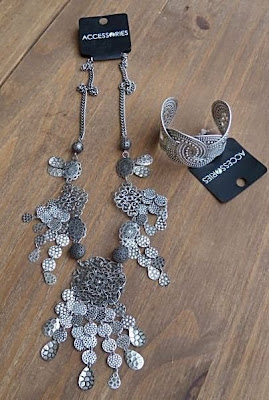