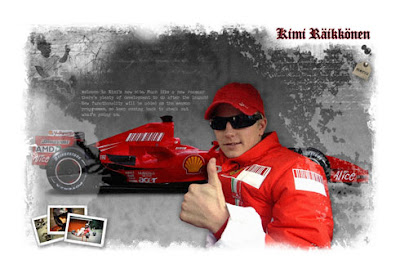 Don't miss out the Grand Prix this weekend!
Qualification Saturday and race Sunday.

The drivers have been practicing today and, surprise surprise, Alonso got the best time in the second of the practicing races. Number two was Massa and number three Kovalainen.
Number four Hamilton and number five Kimi.

In the first practice Massa was number one, Kimi number two and Hamilton number three.
And that sounds to be more up to the reality.We'll see!

There has been an ongoing problem for Kimi the last races when there has been a generating sufficient heat in the Bridgestone tyres which has destroyed the possibility to get the best out of them during qualifying laps.

This is what he said today:

“Definitely the season hasn’t been what we wanted, there has been a problem. It is not the first time, and it is not the end of the life, so we try to fix it. Hopefully we have found something and we get back where we should be. But sometimes things go wrong, Hopefully we can have a stronger race.”
We have tried many things, and I was pretty happy with the car, but you never know.
We have had a good test before and then different conditions at the next race can’t get back to where it was. But we had a good feeling from the Monza test, and we will see now."

Oh, good folks, keep your thumbs up for Kimi!
If you like you can visit his website on this address:
www.kimiraikkonen.com
at 15:04