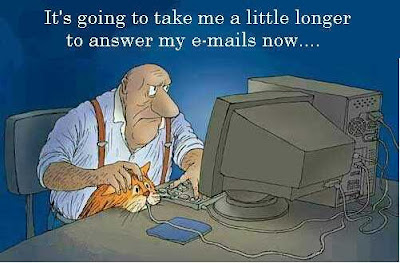 Oh what a muddle! We haven't had any internet again.
We have both been down to the company complaining when it didn't work.
First I went there and then they promised to fix it and it worked Friday night to Saturday when I made the last posts.
Then Saturday night it didn't work again and we didn't have any internet the whole weekend when the company was closed.

When Clas now went there again they said they have changed to a new code and that's why it doesn't work.
How can they do like that without telling us? It's so typical Spain!
They don't know anything about customers service. They just changed the code and think that the customers will show up when the internet doesn't work and then they can tell them the new number.
And why do they change the code the last thing they do before they close the company in the Saturday afternoon? Wouldn't it be better to change it when they are open?
Now all their customers didn't have any internet over the weekend even when they have payed for it! Oh, mi madre!

Bad eggs like this causes the spreading of bad rumours about the Spanish people and their culture and more and more start thinking they are stupid in reality.
The people here on the island have a lack of education so maybe the people on the main land do know better. Maybe the service is on a higher level there? But you never know when the manana, manana culture is common all over the country.

Clas is very busy now in the daytime, helping the Swedish newspaper here on the island to make their 4-color advertisements, but as soon as he gets time he will start looking for a new company.
If an other company will serve better we don't know, but we will try when our internet right now isn't working properly. It's many times every month that it doesn't work at all.
at 01:04