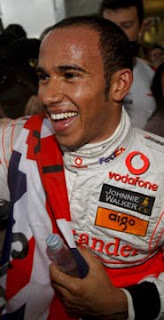 Lewis Hamilton did become Formula One's youngest ever champion yesterday in the most dramatic fashion after finishing fifth in the season-ending Brazil Grand Prix at Interlagos.

As title rival Felipe Massa of Ferrari cruised to victory at his home grand prix, a late-race rain shower looked set to rob Hamilton of the championship after a stop for wet tyres dropped him to sixth, but he managed to overtake Timo Glock's Toyota with just seconds to spare as they entered the pit straight.

Oh , it was so interesting that I almost forgot to breath.

"It's pretty much impossible to put into words," a clearly emotional Hamilton said of his victory. "It's been such a long journey - all the sacrifices we've made, I'm so thrilled to do this for everyone.
"It was one of the toughest races of my life."