Friday - Our day off 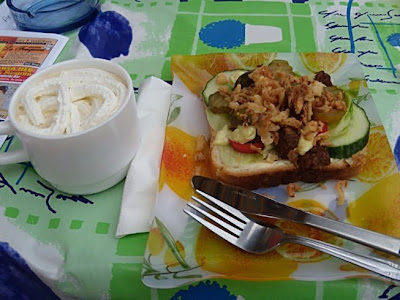 My breakfast today.
We went to Scandicshop today to have the breakfast there.
Fridays are nice days to be there when the weekly Scandinavian newspaper is released and many come to the shop to get their own copy of it.
We stayed there for about three hours today and met many people we know.
Some have been visiting us at Oasis Mango already, but we don't get much time to talk to people in the nights when we only have got two short breaks.

It's cloudy now and we even got a sprinkle of water in the afternoon.
I don't really know what to put on tonight when it's so chilly. I think I'll have to dig deep in the wardrobe.
I walked zig-zag on the way back home but didn't see anything in the shops that I would like to have.

Now we'll have a nap and then we are going out for dinner to a restaurant called La Costa.
We haven't been there before but people say it's a nice place and they have 40 different fresh homemade Tapas on the menu which means we'll go Spanish tonight.

It will be a lot of different dishes and I will take some photos to put up later.
Or maybe I shouldn't? I think some of you blog readers soon will start vomiting when you see all the food we have and it's not nice to make you feel ill.
Quite many have been moaning, telling me they wouldn't like to eat like we do.
I hardly can't understand it when I just see it like an advantage.
I wish everybody could have possibility to have dazzling dinners.

We always think we need to live the life while we still are alive and there is no idea to be tight or moderate or to start thinking in the way of the Scandinavian "jantelaw".
The "jantelaw" is always wrong and we prefer to be free and lucky.
The day you are dead it's too late to start enjoying the life here on the earth and in heaven everything is dazzling! God is not tight but generous! He has got streets made of gold!!!
I think some people will get a shock when they get there and see how dazzling everything is.
They probably will ask themselves why they were so tight and limited on the earth when they could have enjoyed the life.

After the dinner tonight we are going to the shop again to spend the night together with the Scandinavian friends.
at 17:23