Our night in Las Americas

We are back home now and we have had a lovely night. 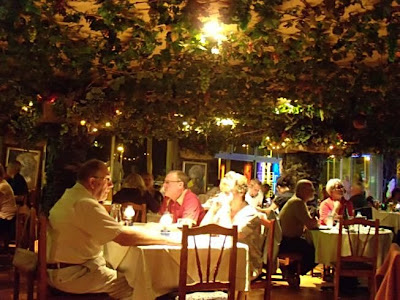 First we went for dinner to Greek Corner in Las Americas.
The restaurant owner Selim is a nice and humble guy from Lebanon.
He stands himself as a PR out on the street every night.
The interior is very groovy with a lot of wine grapes up in the ceiling.
We like the Greece food and try to visit Greek Corner once a month,
but the last month we were so busy that we didn't get there.
The restaurant was very crowded yesterday.
After a while there was no free tables. 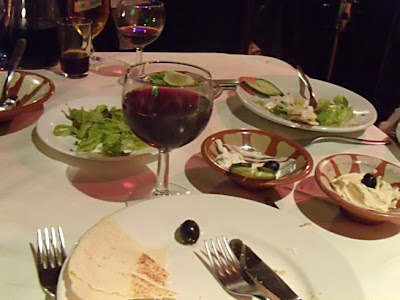 This was our starter.
Sorry, I forgot to take a photo and the plates are almost empty.
We had pita bread with Tsatsiki + an other sauce I don't know the name of ,
+ feta cheese salad + pirogues filled with cheese and spinach.
Really lovely! 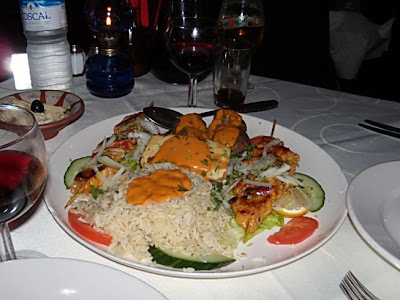 As the main course we had grilled chicken + meatballs of lamb
+ rice + a kind of Greece lasagne .
Sorry I don't know the name of the lasagne.
Is it called moussaka? 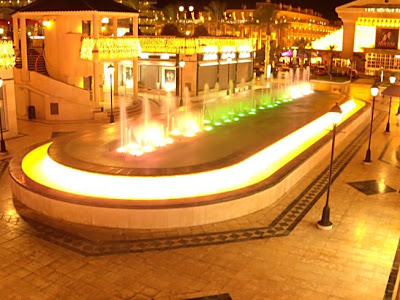 The view from Harry's Cocktail bar.

After the dinner we went by taxi to Harry's Cocktail bar at the
Safari Commercial Center in Las Americas.
It's on the second floor opposite the Piramides de Arona,
also called the Mare Nostrum Hotel.
Here you can have the best drinks in the south of Tenerife.
The bartenders are using a measure to get the right mix and
you can be sure your favorite drink will taste the same year after year.
It's a very popular place but a drink is 8Euros,
which is about twice of the price compare to other restaurants.
Our opinion is that it's worth the price.
Here you'll never be deceived and you get the drink you order.
No local bad spirits in your drink! 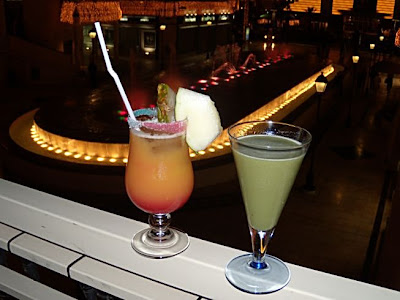 Normally I never have drinks, but in this place I always order a
drink called The grasshopper because I like it so much.
It's made of mint and chocolate liqueur and very mild.
It almost tastes like the Mint-Chocolate ice cream of the Value Brand in America and there are no other restaurants who know how to mix a grasshopper in Tenerife!
I have asked for it before but they don't know what it includes. 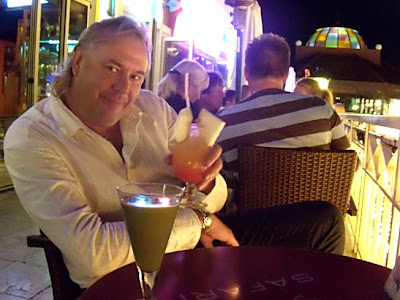 Clas had a San Francisco.
You don't see drunk people in this place when it's a high class on everything. It's the only place where we ever order drinks in the south of Tenerife.
In other restaurants we order beer (which I hate to drink) and
Clas sometimes order a whiskey.
Jeagermaister is also nice if you start feeling ill after a meal.
A Jeagermaister is a Jeagermaister and nobody can fool you. 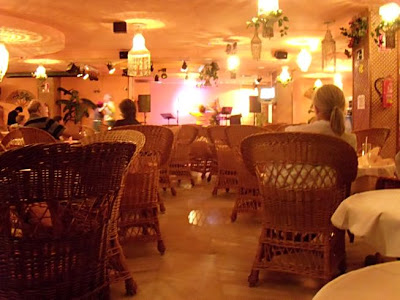 After the drinks we went to Malibu at The Compostella Beach hotel
to check out the situation.
We hoped to meet some Scandinavians there but
they didn't have many guests and it was very quiet. 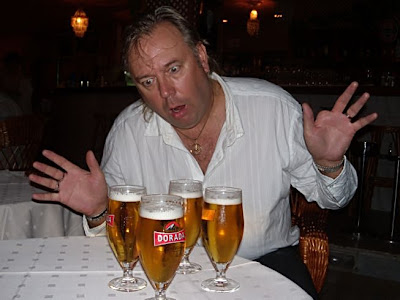 We decided to sit down for a while and ordered a small beer each
but we got two small beers each.
They told us it was the "happy hour"which means they give
twice what you order for the same price.
The time was 11.30 in the night!
In other restaurants it's "Happy hour" between eight and nine o'clock in the evenings.
But they have changed their habits and keep "happy hour " all night long like it seams.
We decided to leave some of it and went home by taxi when we felt so tired.
I don't like to get drunk and we have to work tomorrow again.
Now we'll go to bed.
Good Night!