I tip my hat 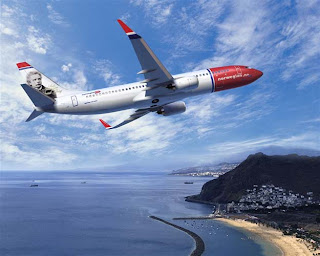 I tip my hat for Scandinavian (SAS) and Norwegian Airlines.
They are helping the stranded tourists of Sterling Airlines, that went bankruptcy last week, back home to Scandinavia for free!

We met three ladies from Norway last Saturday and they had been traveling by Sterling to Tenerife and told us the Norwegian Airways will take them back home for free.
I also read in the Scandinavian newspapers that they help tourists home from other places.

It's so lovely to know there are still companies run by hearts in this tough world.
They don't have to do it for free, but choose to do it that way to just be nice to the affected people.

Some would say it's just PR. But who can afford to fly passengers for free when the competition has reached the edge and many go bankruptcy?
They could earn money out from it! Let's say they could sell the return tickets for half the price and still keep a good image.

I am sure it will pay back in the future. There is a spiritual law that says you´ll reap what you sow and that means there's already a blessing waiting in heaven to be poured out over these companies. Yeehaa!
I hope they will overcome the hard times. They deserve it!

People and Companies that operates in a spirit of helping and giving will be prosperous!
That's what the bible says and God is not a lier? Is he?