At The Wok Buffet 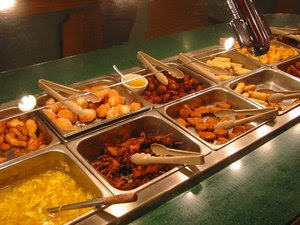 We had dinner at the Asian Wok restaurant tonight.
We picked a table close to the buffet counters and when I had finished the meal I started watching the guests while I waited for Clas.
It was very interesting!

First there was a man, who probably had been eating the buffet many times before. He walked around with his friend from dish to dish explaining carefully what everything was and in what order he was supposed to eat of it.

Then I watched a lady who took three breads from the buffet table and put them on her plate. Suddenly she changed her mind and replaced two of them into the box! Hopefully she had clean hands and didn't pick her nose before she got into the restaurant!

Then an other younger lady started taking the most of the food with her hands and she even tasted some of it already at the counter, licking the fingers every now and then.
Why didn't she use the ladles and saved the eating until she got back to the table? Isn't there any table manners?

There was a fun man who first walked around watching all the different dishes in the same time as he rubbed his hands. It looked like he was thinking; -" Now boys, I'm gonna eat!"
In the end he only had salad and he returned to the same counter to have more. Maybe a vegetarian? Poor man! He missed out all the delicacies.

After a while an old man showed up. He thought the soup cups were meant for the sauces and he poured different sauces into different soup cups and carried them to his table.

In the same time an other man started picking cake pieces by hand and put them on a plate.
The cakes are all placed on their own small plates in the fridge, but he liked to get them together on the same plate.
Two of the pieces fell into the fridge. When he finally was ready he had a lot of cream on his hands. Then he brought the plate with the cake pieces over to the table offering the "desert" to his friends.
I would have neglected to eat of it!

We took it easy and stated it was good we got there early before some of these people started messing around.
Now I'm not interested in having any buffet meals for a long time.
I haven't been watching the buffet guests before and became surprised when so much happened in a short while.

Why do people start behaving like pigs at the buffet tables? Or is this how they normally behave?
To be honest...The buffets are quite beneficial here on Tenerife and I think it was many "hillbillies" eating there tonight. Some men even had shorts and beach slippers on and you could see their dirty toes.
I don't mean that I am perfect myself, but sometimes it's just too much!
at 01:13