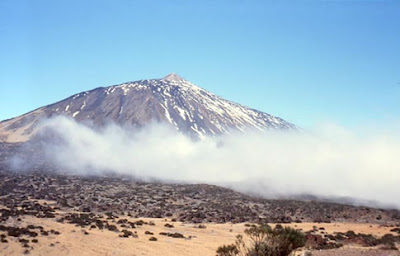 The Teide Volcano with clouds. It's not smoke!

The president of the Spanish Volcanological Society has affirmed that the possible dangers from volcanic activity in the Canarian archipelago is rising.
He also criticizes the fact that, neither the State Plan nor the Special Emergency Plan regarding volcanic risk has been formed, despite the urgent need for them being cited in the 1996 directive.
(Source; Island Connections)

When we moved here 2004 Tenerife was under yellow flag. At that time they also talked about the need of making the plans but nothing has happened.
There are four different colors on the flags; green, yellow, orange and red.
We are right now under green flag.
Orange flag means we have to be evacuated and when the eruption starts we are under red flag.
at 00:19