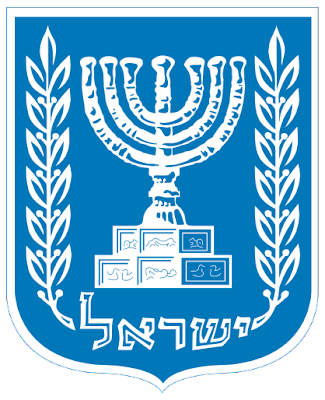 The coat of arms of Israel.

Again some of the media try to arouse a hate towards Israel.
They make big headlines telling the first victim, when the Israeli troops went into Gaza, was a child.
Some of them forget to tell what Israel have been spoken before they went in.
They said:
"The ones who use civilian, old people, women and children as "human shields" have to take responsibility for all damage of the civilian population".
Israel do not like to get the civilians involved!
Maybe a better headline would have been:
"Hamas use children as human shields"?

Please, don't forget that Israel is an approved democratic country.
A member of the United Nations.

Hamas and Palestine are not members of UN!
Hamas is a terrorist organization. Not even the official government of Palestine!

Why some democratic nations have difficult to decide how to relate to the "Israel - Palestine question", or try to be neutral, I hardly can't understand.
Do they hope to be the ones who will mediate an agreement of peace and hope to get some extra points if they can make it?
I mean it's for sure easier to get the contending parties listening when you are neutral.
But do they, in that case, think it's alright to deal with terrorists and to give them some rights so that they become satisfied too?
A terrorist organization is a terrorist organization! Isn't it?
As soon as they get advantage through a terror they start an other terror. Don't they?

The Hamas charter states:
"There is no solution for the Palestinian question except through Jihad".
Jihad means war! Hamas seams to be an organization of blood thirst!

I started feeling for your personnal problems but than this post changed that.

Oh yes and Hamas have weapons of mass destruction.

who is the terrorist again?