Oh, I have been so busy the last two days that I haven't even had time to be on the internet.
I have spend the most of the spare time out on the balcony in the sun, doing rehearsal of new songs.
I tried to get two flies in one slap, like we say in Swedish, and took the chance to get some tan in the same time when it for ones was nice weather.

Saturday night we went by taxi up to Adeje, a small mountain town, with Mick and Frances.
We had a nice dinner at restaurant Rambla and after that we went back down to Los Cristianos and went to Lewinski for line dancing.
Debbie Stone was singing there and it was really many line dancers.
A lovely night.

We played at La Karina Sunday night and it was again very crowded.
Many of the guests had been visiting us before and it was famous faces everywhere when we looked around. We are so happy you all start finding us now. Thanks to the internet and to the bush telegraph!
We had ones over thirty people out on the street watching us, of which many were waiting to get in as soon as they could have a free table.
La Karina is a good place for us. There's room for about 200 guests and we were packed last night.
People were dancing the whole night through and it was many line dancers.

Tomorrow we are off again and we have decided to visit The Monkey Park with Mick and Frances. I will put up some photos later.
I love the monkeys, in the style of the one that Peppi Longstocking had, and I can't wait to get to see them tomorrow.
It's the first time we are going to visit this park that is located outside of Los Cristianos.

Tenerife has got many parks and zoos.
We have the Loro Parque, the Jungle park, the Monkey park, the Camel safari park, the Ostrich park, The Parrot park to name some of them. 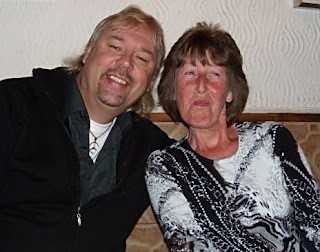 Clas and Frances in Adeje. 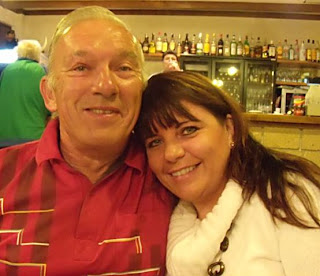