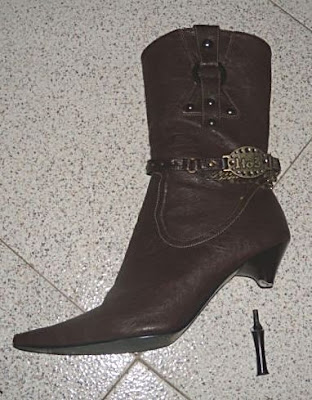 I will tell you a secret...or... I don't know if it's a secret... but...
Thanks to the "kitchen ladies" not many people saw what happened last night at La Karina!

We were playing "Y viva Espanja" and when I was dancing and jumping on the stage one of my heels broke off and i suddenly were standing there with one high boot and one low boot.
Oh, what a shame!

First I tried to put the heel back in place but it fell off when I moved the foot.

Then I put the tambourine down on the floor, trying to stand on it to get balance. But it didn't work when the tambourine stood straight up every time I stood down on it.
I tried to continue dancing like nothing had happened standing on the toes.

Finally Clas took a tape out from the box of the mixing console, and taped around the nail that is inside the middle of the heel and I put it back in place and stomped on it and we could continue the show like nothing had happened. The heel stayed there the whole night through!

I think only four people at the tables close to us saw it!
The ladies who work in the kitchen like the "E viva Espanja song" and last night they came out to dance again and the audience were so surprised by their presence that they didn't see what happened on the stage. Good luck for me!

I will now bring the boot to the cobbler to ask if he can fix it.
Hopefully I don't have to throw them away. I think I have used them only five or six nights so far. I bought them last winter.

It's not the first time this happens! It has happened about five times before with other boots when I have been line dancing and jumping with the weight kept onto the heels.

I don't know what you think when you read this... but maybe it's time for me to get into a diet?
Or do you think they make weak heels in Spain?
at 21:48