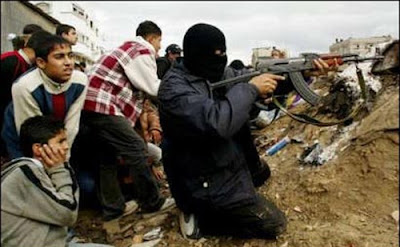 Annelie Enochson wrote today an debate article about the middle-east conflict in Expressen, one of the biggest news papers of Sweden.
The head line said: Hamas use children as shields!
Exactly the headline I proposed a couple of days ago in my first post about the conflict.
She encouraged minister Carl Bildt to speak clear about the guilt of Hamas.
I am so happy there are still MP:s (Member of Parliament) who are brave enough to stand up for the justice. *Like to send a rose to Annelie!*

Hamas now say they are prepared with a lot of suicide bombers who will meet the Israeli soldiers in Gaza.
I hope they will not use children.
It's known that Hamas for many years have indoctrinated the school children through TV-programs, school books and youth camps and built up a hate in them toward the Jews + glorified the killing of the Jewish people.

Hamas have also gone so far that they use hospitals, schools, mosques and private homes as warehouses for the ammunition.
There are families in Gaza today that have to live on the top of rocket stores and ammunition depots and it's really difficult for Israel to reach these targets without getting the civil population involved. To win the war they have to reach all the targets.
To force somebody to live in such dangerous circumstances is against all conventions of war and the human rights! Isn't it?
*Like to send twigs to Hamas!*

Click here to read the Swedish article of Expressen.

The Gaza strip is to the left at the Mediterranean sea.