Friday - On the beach.

We have been on the beach all day long. It was really hot and we have all become a little bit burned even when we used sun protections.
Mattias, Pia and Clas took dips in the sea every now and then but I prefer to stay on the beach.
I don't like the salty water and to swim around where it's a lot of people when I don't know if somebody have been urinating in the water. I think it could be the same as swimming in a sewer and who would like to do that?
I don't swim in pools either or in big bath houses like Tropic Landia in Vasa, Finland.
The world is filled with people who act in a disgusting way! Just look how sweaty all are when they jump into the sea and I think they have found excrements some times in the most of the pools! Ugh!!

Tonight we are going by taxi up to a mountain village called Adeje for a Spanish dinner.
We will order a lot of different plates to give Pia and Mattias an insight of the Spanish cuisine.
It will be different Spanish sausages first in small pieces just to have a taste. Then we will have a nice crispy salad made of vegetables from the island. Then papas arrugadas made in the oven with different herbs and the famous garlic chicken a la Adeje and pork meat on sticks and ribs. Then in the end homemade Tiramisu and we will of course drink vine from the north of Tenerife.

You maybe wonder how my diet is going? I tell you! It has left for the moon!
But I will continue again next week.
Maybe it sounds like we are guzzling terribly, but it's not as bad as it sounds when it's only about small portions everything we eat.
Here on Tenerife it's quite common to mix a lot of different meats and fishes and plates in the same meal when all the different plates are only in the size of the small national tapas.
We are quite used to this kind of style and think a normal menu with only one type of meat or fish is quite boring. That's for tight people!
We like to eat dinners that are made by creative chefs who are not afraid of trying out new taste sensations and who makes a show of every dinner. It really puts embellish into the daily life! 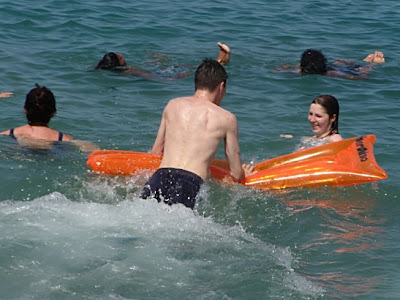 Mattias and Pia swimming in the Atlantic Ocean. 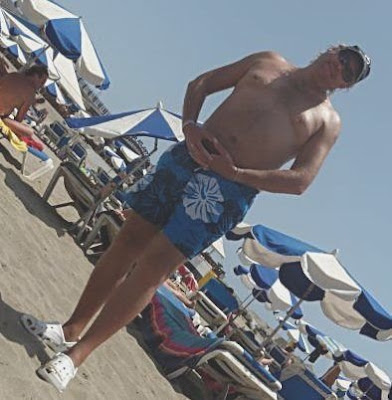 Clas on the beach.