One week of vacation 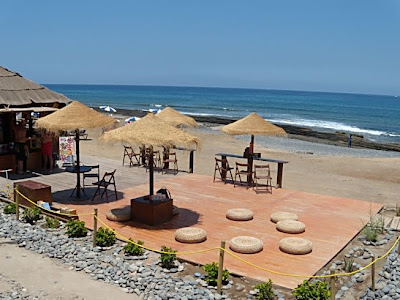 A nice playa in Las Americas
We have been singing backing vocals the whole afternoon. Now we have got three more songs ready for the winter + we did backing vocals on some of the songs we already sing in the nights too, when they didn't have any.
I think they will be like new songs for us now.

The last month we have been singing quite a lot of modern country songs in the nights when the audience has been much younger than in the winter time.
Summer time: 20-30 years+. Winter time 50-60 years +.
It has been fun for us when we sometimes get tired of singing the same old country hits that the people like to hear in the winter time.
They are all very nice songs but we have been singing some of them about six days a week in a time of three years now and then it's nice to just put them to rest for a month or two and they start feeling fresh again.
And this autumn we will have some new line dances to mix with the old ones too when the dancers who have started going to the classes the last years maybe don't know all the old dances that we normally play.

My son Mattias and his girl friend Pia are coming here to see us Tuesday and then we have decided to have nine days of vacation. We normally have vacation in July but this year we will have it in August instead when that fits us better.
There will be an other musician at Lewinski while we are off so don't hesitate to go there if you are on Tenerife.
We will be off 12-20 of August which means we start playing the 21st of August!
at 18:03