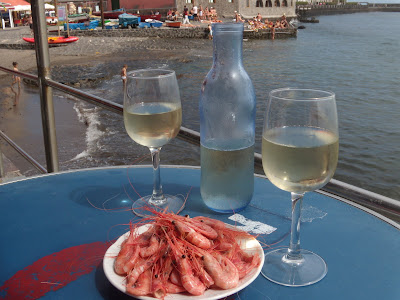 We started with Camarones. They are a 'must have' in warm days.
A couple of days ago (Saturday) we had a lunch in El Medano.
There's a restaurant very close to the beach where we like to sit and eat and
watch the waves rolling into the score. It gives peach and relax to your mind. 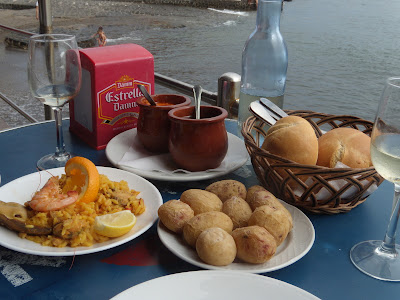 As a main course we had paella and pan with mojo sauces and
papas arrugadas... 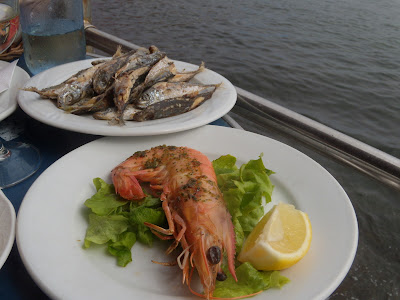 ...and sardines + I ordered a real big gamba that I had myself when
Brito really don't like them. 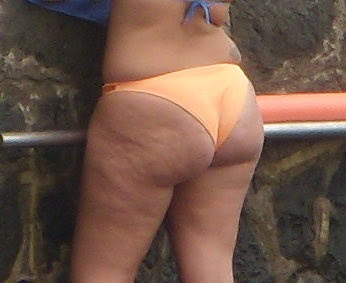 We had a nice meal but this woman was a disgust to my boyfriend.
He don't like to watch celluites while he's eating and thought she would be okay with a skirt on.
You know; He's a restricted Canarian man! 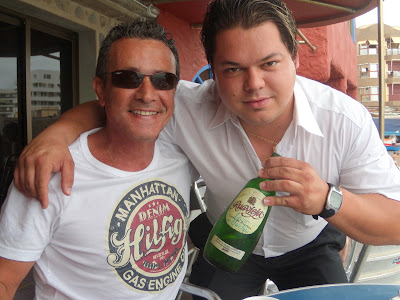 'The Playa Chica' was serving us during the meal.
Please, understand mi right! He's called *Playa Chica' which means the
'Beach Girl'. It's not me giving him a nick name! I'm a good girl!!! 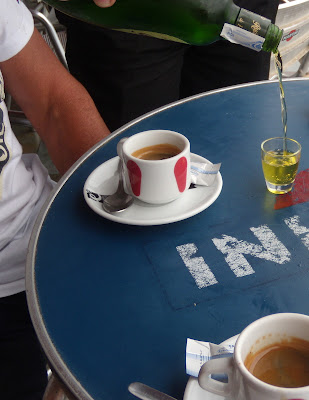 As a desert we had 'Cafe Cortada' (Canarian Coffee) and an Orujo (Canarian Liqueur) an other 'must have' when it's good for the digestion. 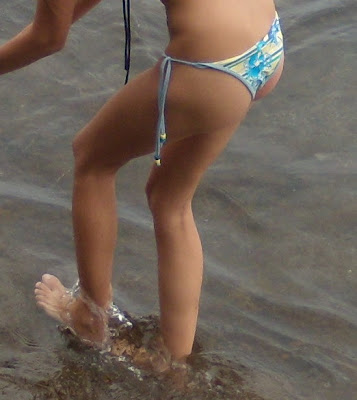 Suddenly an other 'ass' showed up below the terrace.
Brito thought this one was too tiny...
He,he! I'm glad to tell you he thinks I'm okay!
That's anyhow what he says...?!!! 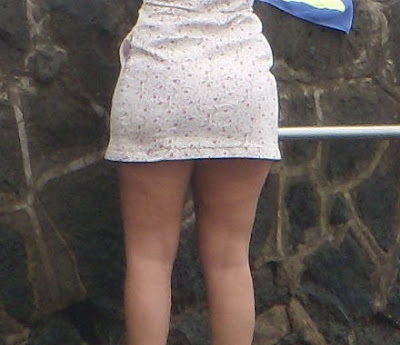 A nice surprice in the end of the meal was that the
first girl suddenly put on a dress.
I must tell you I was convinced!
She looks more beautiful with the dress on!....Brito was right!
She even looks a little bit sexy. Don't you think so?

What do we learn from this?
If you have got a lot of cellulites; Hide them under a short sexy skirt or dress while you are on the beach...specially if you see people eating nearby.
But, to be honest, I don't really think the cellulites are the
worse things on the beach.
I just like to mention 'old hangy breasts'!!!
Maybe I'll blog about them an other time..?!

He,he! My sensation when I now afterwords read this post is that I was spending the afternoon in El Madano like a paparazzi taking photos of different behinds.
Do you think this is normal? I'm not sure!
.
at 14:17 1 comment: 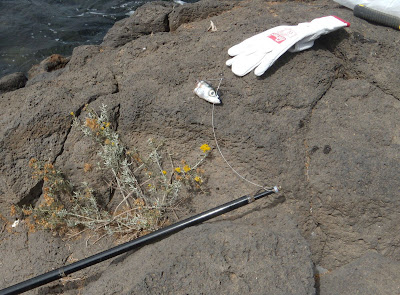 Brito brought a fishing gear for morenas.
Use gloves if you catch one because they bite!
Oh I've been very lazy when it comes to blogging.
Her some more photos that have been waiting in the camera...
My son Daniel was here during the carneval week and one day we
went down to Las Galletas to have a barbeque and do some morena fishing.
We had a lovely relaxing day but...Bad Luck!
We didn't catch any morenas. Hopefully better luck next time.
He'll be back here again in April and then we probably will do some more fishing. 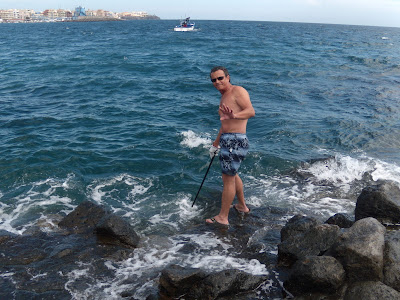 Brito fishing.
The morenas are staying down inunder the rockets. 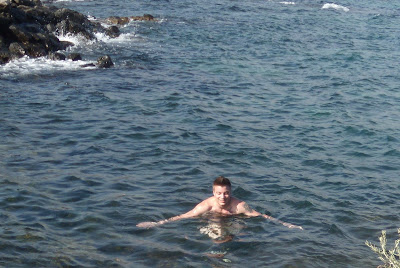 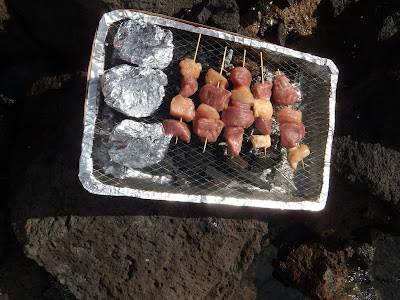 The barbeque.
We had pork and chicken and inside the folie baskets I have made a
mix of potatos and batata pieces, feta cheese, different vegetables + spices. 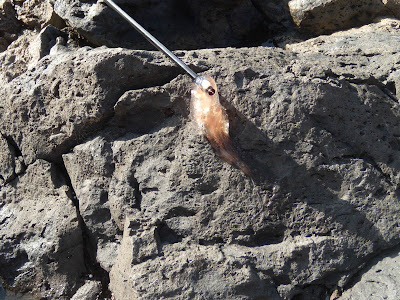 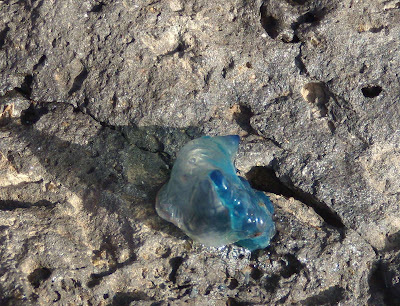 The waves had brought this jellyfish up on the rockets.
Looks dangerous by the color.
I'm happy it didn't touch Daniel while he was swimming. 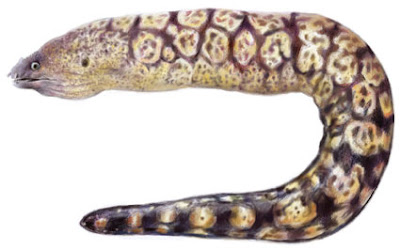 This is a morena. 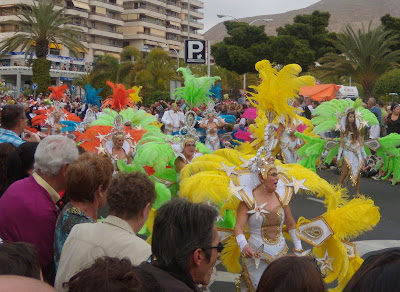 I found some carneval photos in my camera.
The carneval here in Los Cristianos was this year held from the
1st til the 12th of March. 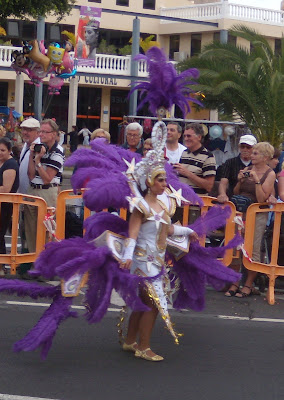 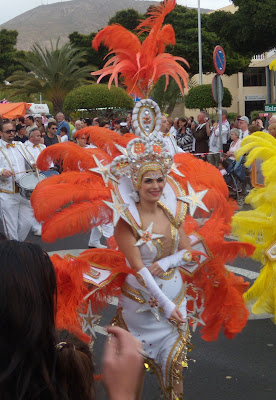 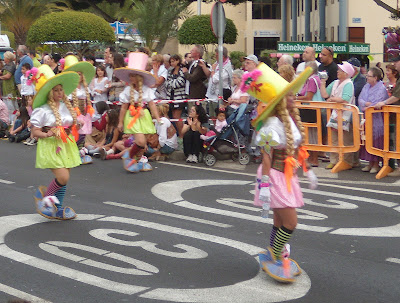 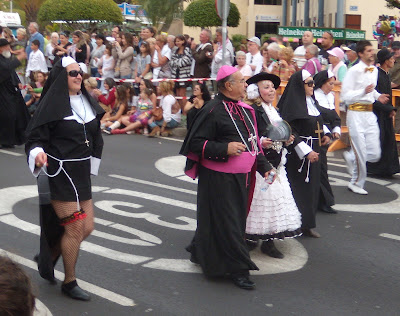 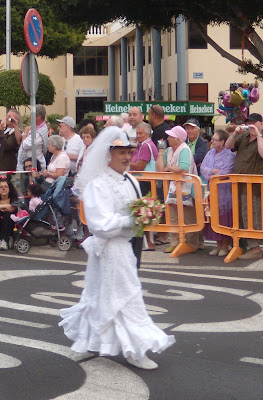 I decided to welcome the springtime on my blog by giving it a new look.

I will Sing Again On Sunday

My computer fell to the floor and crashed last night.
A company have been looking at it today and they think they will get it repaired.
It can take up to a week before they get the spare part but I can use the computer like normal already now if I just connect it to a monitor.
It was only the monitor screen that crashed and they will change it to a new one as soon they can get a new one that fits.
This means I will sing like normal at Lewinskis from tomorrow night (Sunday).
Welcome to everybody.
at 00:18 No comments: