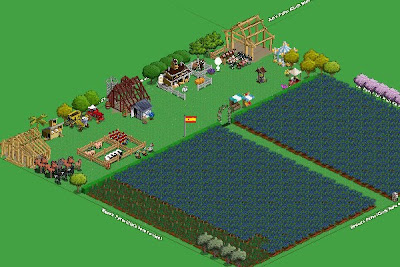 My farm in Farmville.
I have been growing blueberries today and
the photo was taken before the harvest.
If somebody have visited my wall on the Facebook they might think the 'game devil' has possessed me?! The wall is filled with Farmville statements!
I have been playing the Farmville game every day the last two weeks and I'm already in world 22.

It was a friend of mine, Karin from Sweden, who invited me to join the game and I decided to give it a try.
First I thought it was a little bit boring to just seed and harvest fruits and vegetables but when I got further into the game it became more interesting.
Now it's just fun to try to get more stuff so that I can build up a real beautiful farm.

Farmville is a very creative game and it's interesting to watch how friends from different nations arrange their farms.
The Americans i.e. put their fruit trees in many rows like on the fruit fields in Florida, while the Scandinavians often use the trees as decorations in their gardens putting one here and an other there.

As soon as I started the game I discovered many of my Facebook friends already had joined.
They started sending me all kind of gifts and construction materials and kept me busy receiving and placing the gifts. Without their input I would not yet have been so far into the game.

This game keep me busy all day around now.
I'm right now trying to earn as much money as possible to be able to buy some nice buildings and decorations. I haven't even got a mention to live in yet and as soon as I get one I will start arranging a beautiful garden around it, probably with a pool and everything!

I figured out raspberries give the best benefit. The only problem is that you have to harvest and plow and then seed new seedlings every second hour! But it brings in a lot of money and when that's what I need now I'll have to stick to these fruits for a while.
I have to stay up late in the nights to bring in the harvest and get up early in the mornings to do the same, but it's just fun.

If you are on Facebook I now like to invite you to join the game!
We can become neighbors and help each other by sending material and gifts to each other.
NB! You don't have to became as crazy in playing like I am !!!
As soon as I get the boyfriend back on Tenerife I for sure will slow down a little bit and become more normal!

Have a nice evening!

I got a nice surprise Thursday night at Lewinskis.
About 15 line dancers suddenly showed up and I sang line dance songs the whole night through.
It haven't been many dancers the last 2-3 weeks.
It was such a lovely night and I wish we would have so many dancers in all the time.
I like to sing when the dance floor is crowded and the dancers who visited Lewinski last night knew almost every dance for the songs that I sang.

In the last break Elvis (Tony Warburton) showed up.
He's a mate of Mr X, and now also a friend of me.
He has got a real nice Elvis voice and sang a couple of songs for us.
A real nice surprise!

I made a video clip in the beginning of last night, but forgot to take a clip of Elvis.
I will do my best to remember the camera next time he shows up!

I am busy doing rehearsal of 10 new line dance songs.

These are the dances / songs that I'm learning or have learned lately:

Broken Heels - Broken Heels, Alexandra Burke
Rhyme Or Reason - It Happens, Sugarland
Quarter after One - Need You Now, Lady Antebellum
American Honey - American Honey, Lady Antebellum
Gave It All Away - Gave It all Away, Boyzone
Upside Down - Upside Down, Paloma faith
Bobbi With An I - Bobbi With An I, Phil Vassar
People Are Crazy - People Are Crazy, Billy Currington
Break Your Heart - Break Your Heart, Taio Cruz
Tumbling Rush - They Call It Falling For A Reason, Trisha Yearwood

I also do rehearsal of a couple of older songs that are not famous line dances but are popular among the tourists:

I found a new template for my blog and I like it so much that I just had to change the look of my blog again.
at 16:29 No comments:

I went out again last night after work so my plan to be a good girl hasn't really come true yet.
But I anyhow don't drink much when I'm out and it's more about socializing than drinking.

A guy from Irland asked me to come with him to The Dreamers Bar and I got home about 3 o'clock in the morning which is not bad. That's the normal bedtime for me.
I made a short video clip.
Please, click on the small arrow if you like to watch it.
I don't know the name of the singer when he is a man from the audience.
Mark and Darren, the musicians at Dreamers, often
have guest artists singing.

Tonight I went out to Fortuna Nova for a meal.
This is what I had: Chicken Soup, Ribs and Chocolate Mousse.
Guess if I'm stuffed!!!
But I must start loosing weight now again so I will soon start takin' it easy.
This was only an exception! 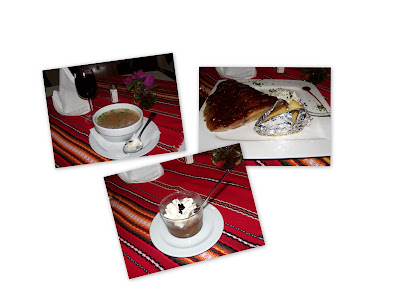 Mr X is leaving for England tonight.
He's right now out moving his car to his friends garage and will soon be back and start packing the suitcases.
It will be very boring when he's not here. I've already become so used to have him in my house and I will for sure start feeling lonely.

We have been out to The Claddagh Bar two nights in a row now and I feel a little bit tired today.
It's good it's a night off and I can go early to bed.
I have decided to become a good girl when he leaves and I will only go out two nights a week, i.e. Sundays and Mondays when I'm off. We'll see!

It was very quiet last night at Lewinski. The most quiet night I have had since I started singing there.
Only about 15 people visited the restaurant during the night and I stopped singing already at 11pm.
It's not many tourists here now but hopefully the tourism will come up again in the end of the week.

A Man Lives With Me

I'm sorry I don't blog much right now.
It's only because I really don't know what to say.

Sometimes so much is going on in my life that I almost become scared of the blogging.
You know, I like to have a private life too!
I start thinking that the people who know what's going on in my life probably will look at me like a false person if I just continue blogging about this and that not telling anything about what's really going on.
So if I don't blog it's many times because something is going on that I really don't like to tell or don't know how to tell...*smile*

Anyhow I will tell you one secret today an that is that Mr X (the English boyfriend that I started dating in February) is living with me!
He,he! I really can hear how some of you is saying; 'Oh that was too quickly!'
But, please, don't be too shocked! It's only temporary and he is going home to England on Tuesday night to take care of his house + maybe look for a new tenant...and he will stay away from Tenerife for a while because of this.
So from Wednesday I will live on my own again!

Now I have told you one of my secrets...*gust*
I'm going to sing at Lewinski tonight and I'll have to start doing the makeup now to get ready in time.
Have a nice evening!

The temperature is about +25 degrees tonight and I have been line dancing and singing at Lewinskis. My hair is wet like the fur on a soaked cat and I will have a shower as soon as I have finished this post.
It's really warm to wear the cowboy hat now and I had it on tonight...stupid me!
(I'm afraid that if I have the shower first I will forget about the blogging just curling up to bed.)

A lot has been going on the last days and nights and because of that I haven't been blogging at all.
My English boyfriend (Mr X) has moved out from his apartment and I have helped him with that.
One night we were moving stuff til 7.30 in the morning!
Now I'm helping him to get all the clothes in order.
I think it will take a couple of more days because he has got a lot of clothes.

He,he! He must be a brand freak! He only uses brands like Bench, Yves Saint Laurent, Tommy Hilfiger, French Connection, Timberland, Calvin Klein, Adidas etc.
He told me before that he would be afraid to marry me when I would cost him so much money, telling him we must buy this and that... but now it's me thinking the same about him!
Even his socks are brands!!! I almost couldn't believe it!!!
I buy cheaper clothes than him and when he has about as much clothes as me he is the one who is more expensive! Don't you agree?

I got a Epiphone Gibson guitar from him the other day and as soon as I get time I will start doing rehearsal on it.
I don't promise that I will start playing guitar on the stage. I know a little bit about how to play on it but I anyhow don't think that I'm good enough to play at the same time as I sing on the stage... We'll see! 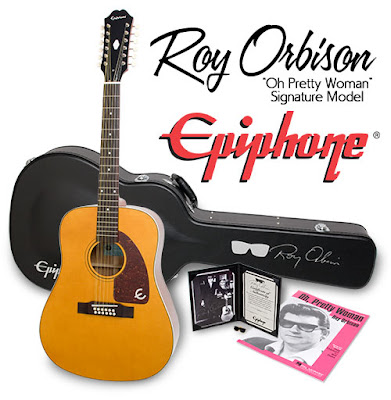 The guitar I've got looks similar to this one but
mine has got 6 strings.
Roy Orbison had one with 12 strings.